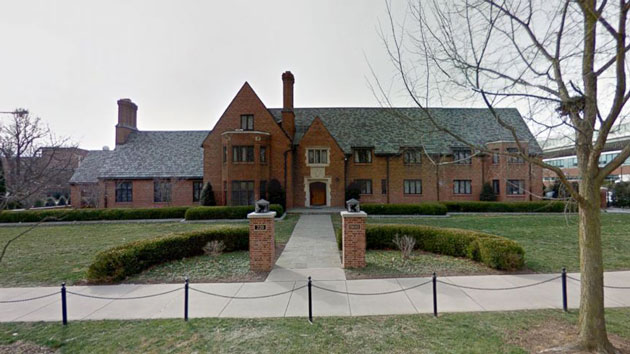 Google Map Street View(HARRISBURG, Penn.) — An anti-hazing law named in honor of a Penn State fraternity pledge who died following a hazing ritual will soon go into effect in Pennsylvania.
The bill, to be signed into law Friday by Pennsylvania Gov. Tom Wolf, will enforce stricter criminal penalties for hazing.
The law comes after Tim Piazza, a 19-year-old sophomore from New Jersey, died after his first night pledging Penn State’s Beta Theta Pi fraternity in 2017.
Piazza's parents, Jim and Evelyn Piazza, who have become anti-hazing advocates in the wake of their son's death, will attend the signing.

Courtesy Piazza FamilyThe Piazzas "are grateful for the unanimous passage of the Timothy J Piazza Anti Hazing law which, they believe, will serve a national model for anti-hazing legislation," the family's attorney, Tom Kline, told ABC News.
Kline called Friday's signing a "significant step forward in deterring and eradicating the scourge of hazing on university campuses throughout the nation."
The law will require schools to help prevent hazing, provide law enforcement tools to address hazing and hold abusers accountable, Wolf said, calling it "one of the nation’s strongest anti-hazing laws."
"Hazing cut Timothy’s life tragically short, but the reforms in this bill will help protect other students," the governor said Thursday on Facebook.
According to The Associated Press, among the changes enacted by Friday's law are: severe forms of hazing will be considered a felony; fraternity houses can be confiscated if hazing took place there; schools must have policies to fight hazing; and under certain circumstances people would be protected from prosecution if they sought help for someone being hazed.
The legislation stems from Tim Piazza's death after he took part in an alcohol-fueled hazing ritual known as the "Gauntlet" at his fraternity house on Feb. 2, 2017.
That night, during his first day of pledging, a heavily intoxicated Piazza was heard falling down the stairs, and later found lying face down at the bottom.
What happened next is described in horrific detail in a grand jury report citing evidence including surveillance video, witness testimony and phone records.
Fraternity members carried Piazza up the steps and put him on the couch. They dumped water on his face and slapped him in an apparent attempt to wake him, to no avail, the report shows. When one pledge tried to intervene, insisting they get Piazza some help, he was shoved into a wall and told the brothers had it under control, the report shows.
As the night went on Piazza tried over and over to stand on his own, falling each time and eventually going still, the report shows. By the morning of Feb. 3, he was breathing heavily, with blood on his face. When a fraternity member finally called 911 for help, the 19-year-old's skin had turned gray, the report shows.
Tim Piazza died a day later of traumatic brain injuries.
Beta Theta Pi was then barred from Penn State and the university announced a string of new reforms for Greek Life.
Many former fraternity brothers faced charges following Piazza's death. One former member has pleaded guilty and will serve a year of probation. The most serious charges were dismissed but several other members are set to stand trial.