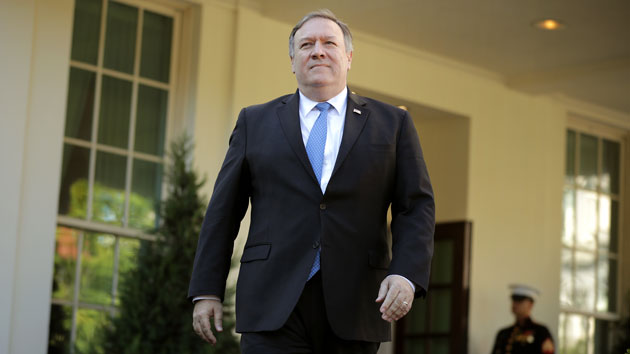 Chip Somodevilla/Getty Images(WASHINGTON) — Secretary of State Mike Pompeo said he told President Donald Trump that the Saudis should have “a few more days” to complete their investigation into Washington Post columnist Jamal Khashoggi’s disappearance.
But even as he pumped the brakes, the administration announced it was taking one new step – and pulling Treasury Secretary Steven Mnuchin's participation in a major Saudi investment conference next week.
“We made clear to them that we take this matter with respect to Mr. Khashoggi very seriously,” Pompeo said following his nearly hour-long briefing with the president. “They made clear to me they too understand the serious nature of the disappearance of Mr. Khashoggi. They also assured me that they will conduct a complete, thorough investigation of all of the facts surrounding Mr. Khashoggi and they will do so in a timely fashion and that this report itself will be transparent for everyone to see, to ask questions about, and to inquire with respect to its thoroughness.”
Trump echoed Pompeo's comments shortly after, tweeting that the secretary of state met with him Thursday morning and discussed in "great detail" the investigation and meeting with the crown prince.
Pompeo again stressed several times in his statement the “long strategic relationship” the U.S. shares with Saudi Arabia and their status as an “important counter-terrorism supporter.”
He said between the Turkish and Saudi investigations they expect “a complete picture will emerge for what actually transpired here.”
Pressed why the Saudis should be entrusted with an investigation into themselves, Pompeo said: “We’re all going to get to see the work product.”
“We're all going to get to see the response the Kingdom of Saudi Arabia takes with this,” Pompeo said. “All of us will get a chance to make the determination… whether it's fair and transparent in the way they made a personal commitment to me and the Crown Prince made a personal commitment to the president when he spoke to him the night before last.”
Next week, the Saudis will host a major investment forum called the Future Investment Initiative, sometimes referred to as "Davos in the Desert" after the famous summit in Switzerland. Several business leaders and media companies have pulled out of the event because of the Khashoggi episode, including Uber CEO Dara Khosrowshahi, Viacom CEO Bob Bakish, Virgin and its CEO Richard Branson, venture capitalist and AOL co-founder Steve Case, LA Times owner Patrick Soon-Shiong, Bloomberg Media, and CNN, among others.
After growing pressure about his appearance, Mnuchin announced on Twitter Thursday he would no longer participate after speaking with Trump and Pompeo.
Pompeo's comments also come amid ongoing speculation that Turkey may have audio tapes that reveal what happened to Khashoggi, a Saudi journalist and royal insider who has been missing for over two weeks after entering the Saudi consulate in Istanbul.
Pompeo met with Turkish President Erdogan and Foreign Minister Mevlüt Çavusoglu Wednesday but refused to express any doubt or skepticism about the legitimacy of a Saudi investigation into Khashoggi’s disappearance.
Following that meeting, Trump stressed that his earlier comments about Saudi Arabia's denials of any involvement in Khashoggi's disappearance were not an attempt to give the oil-rich ally cover.
“No not at all, I just want to find out what's happening,” Trump told reporters.
Khashoggi, who had been living in the U.S., visited the consulate to file paperwork for his wedding and has not been seen since. Turkish officials allege Khashoggi, who has written critically about the Saudi government, was killed, which the Saudis have fiercely denied.
Turkish officials say that a hit squad of 15 Saudis flew to Istanbul for just hours surrounding Khashoggi’s disappearance, and they reportedly claim to have audio recordings of Khashoggi being interrogated and murdered.
Trump told reporters Wednesday the U.S. has asked for the recordings “if it exists.”
“We don't know if it exists yet. We'll have a full report when Mike [Pompeo] comes back, that's going to be one of the first questions I ask him,” he said in the Oval Office.
In his first sit-down interview with U.S. media, a close friend of Khashoggi's described to ABC News what he'd been told in briefings by Turkish security officials.
"I talked with some Turkish government and security officials and they said Jamal was killed. I didn't know what to do. I really couldn't answer. Then I called a few colleagues, again security officials, trying to have them verify it, saying 'Is this really true?'" Turan Kislakci said Wednesday. "They said, 'Yes, Turan, and let's tell you even beyond that, he was killed in a very barbaric way.' I was shocked. They not only kill him in the consulate, but also in a barbaric way."
Khashoggi warned of increasing efforts to silence the media in the Middle East in a column he wrote just before he vanished earlier this month. The "final column" was published online Wednesday.
Karen Attiah, global opinions editor for The Washington Post, wrote that Khashoggi’s translator sent the article a day after the journalist disappeared while visiting the Saudi consulate in Istanbul on Oct. 2.
This is a developing story.