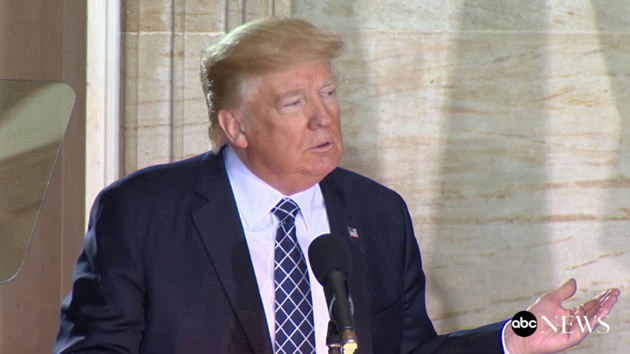 ABCNews.com(WASHINGTON) — President Donald Trump on Wednesday called on the members of his Cabinet to draw up proposals to cut spending for their respective agency budgets by 5 percent, and although he didn't make a direct connection, his call came after news earlier this week that the federal government ran up its largest annual deficit in six years.
“I’m going to ask each of you to come back with a 5 percent cut for our next meeting, I think you’ll all be able to do it,” President Trump told his assembled Cabinet, reserving the possibility that there could be a “special exemption” for a department or two but that others may be able to make more dramatic cuts than 5 percent.
“I think you can do it, so I'd like to have everyone sitting around the table, your incredible domains you preside over, in some cases very well, in some cases brilliantly, I would like you to come back with a 5 percent cut,” Trump said. “Get rid of the fat, get rid of the waste. … It will have a huge impact.”
Dubbing it the “one-year nickel plan,” President Trump expressed a belief that the government could make significant progress toward bringing down government spending by making modest cuts to each executive department.
Seemingly offering a defense of having signed a massive $1.3 trillion omnibus spending package back in March, which included $700 billion for the military that Trump argued was necessary as a matter of national defense, Trump said the federal government is now in a position to tighten its belt.
“Now that we have our military taken care of, we have our law enforcement taken care of, we can do things we weren't into in a position to do when I first came,” Trump said.
But while the president can call on his Cabinet secretaries to propose spending cuts, ultimately it’s up to Congress to approve the federal budget.
The Treasury Department said Monday that the government ran up a $779 billion deficit this past fiscal year – a 17 percent increase from the $666 billion deficit the fiscal year prior.
The news of the deficit flew in the face of the Trump administration’s previous declarations that the GOP trillion-dollar-plus tax cut plan, passed late last year, would pay for itself by generating economic growth.
"Not only will this tax plan pay for itself, but it will pay down debt," Treasury Secretary Mnuchin said at the time.
"You will see faster economic growth result from this bill. You will see higher wages, more jobs, bigger paychecks, bigger GDP, and if you see a bigger economy, that means you get more revenue," House Speaker Paul Ryan said at the time.
Senate Republican Leader Mitch McConnell, for his part, declared at the time that it will be "beyond revenue neutral," even as multiple outside economic analyses said otherwise.
On Wednesday, McConnell defended the 17 percent increase in the deficit this year. While he said Tuesday that it was because of bipartisan refusal to touch entitlements, he added Wednesday that it also had to do with increases in domestic spending that Republicans had to agree to in order to get their desired defense spending boost.
“I think we ended up spending more because of the contingencies that we were facing,” he said.
Democrats were quick to pounce on the news of the deficit increase earlier this week.
"Republicans passed a tax scam for the rich that is adding $2 trillion to the deficit in order to give massive tax breaks to Big Pharma, big banks, big corporations shipping jobs overseas and the wealthiest 1 percent," Democratic Leader Rep. Nancy Pelosi said in a statement. “Under the Republican agenda, the rich get richer, and everyone else is stuck paying the bill.