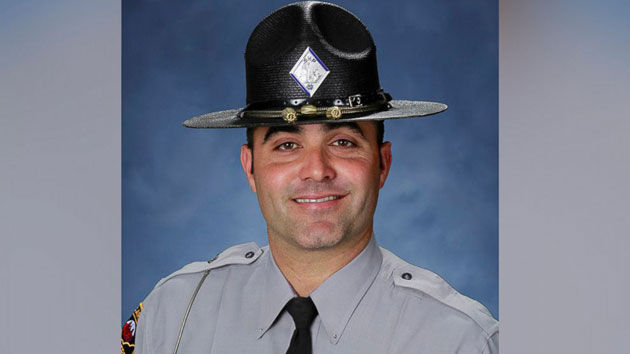 NC Highway Patrol(COLUMBUS COUNTY, N.C.) — A veteran state trooper in North Carolina was shot dead while making a traffic stop early Wednesday, authorities said.
The deadly confrontation unfolded when Kevin Conner, an 11-year veteran, stopped a pickup truck for speeding in Columbus County just after midnight, the North Carolina Department of Public Safety said.
The driver pulled onto the shoulder, and when Conner approached, the driver allegedly fired several shots, authorities said.
The suspected shooter then fled the scene and led police on a car chase, authorities said.
His car became stuck while trying to drive over a railroad crossing, authorities said, so he then fled on foot.
The suspect as found after an "extensive search" and taken into custody without incident, authorities said.
"The Highway Patrol family is mourning the loss of a hero," State Highway Patrol commander Colonel Glenn McNeill Jr. said in a statement.
The department "will forever be changed by the tragic events," he said. “We ask everyone to please keep Trooper Conner’s family and all who knew him in your thoughts and prayers.”
The suspect has not yet been identified, authorities said, adding that charges are pending.
Copyright © 2018, ABC Radio. All rights reserved.