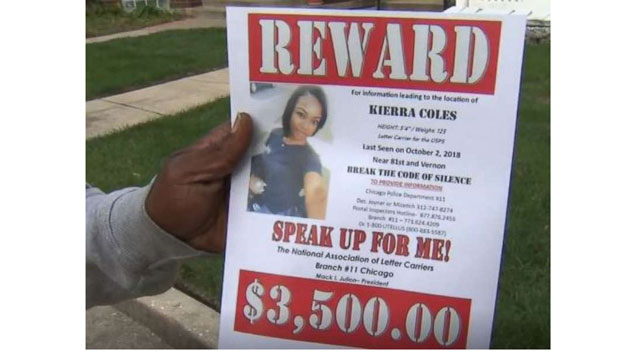 WLS(CHICAGO) — The U.S. Postal Service is now getting involved in the search effort for one of their own.
Kierra Coles, 27, disappeared after being seen on video two weeks ago outside her home. She has not been heard from since, authorities said. On Tuesday, the U.S. Postal Service Inspection Unit announced it was offering a $25,000 reward for help in her safe return.
Coles is 3 months pregnant and has a boyfriend, officials said.
The postal worker was last seen on surveillance video from outside her apartment in Chicago's South Side on Oct. 2. Police said she called out of work that morning saying she was sick, but was seen on the video wearing her uniform and her car was found outside her apartment.
Police said they are treating the case as a non-suspicious missing person.
Coles' mother, Karen Phillips, said it's possible she became overwhelmed by everything that was going on in her life. Phillips told Chicago ABC station WLS her daughter recently moved out of her home and into the apartment.

"Maybe something did happen where she was overcome with a lot, you know when you are pregnant you are emotional," she said. "I want to say she just went somewhere and didn't want to tell nobody and then she will just come home but I don't feel that."USPSThe $25,000 offered by the USPS Inspection Unit is in addition to $3,500 offered by her postal union, WLS reported.
"Whoever it might be knows something," her father Joseph Coles told WLS. Joseph lives in Wisconsin, but has been in town for two weeks handing out flyers and said he "would not leave" before finding her.
"We're not going to sit idly by and we're not going to rest until we find our sister," Mack Julian, from the Letter Carrier's Union, said.
Cole is 5-foot-4 and about 125 pounds with black hair and brown eyes.
Copyright © 2018, ABC Radio. All rights reserved.