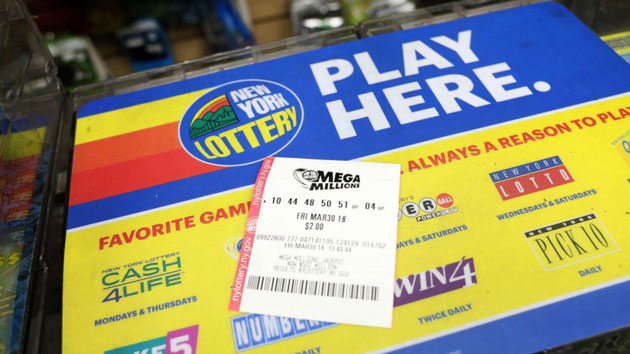 Emilie Richardson/ABC News(NEW YORK) — Powerball pulled its numbers on Wednesday as the prize for Friday's Mega Millions jackpot has crept past $900 million earlier in the day.
The winning numbers for Powerball, a comparatively meager sum of just $345 million, were 3-57-64-68-69 and a Powerball of 15. The cash option will pay out $199 million.
But the record numbers are being left to the Mega Millions jackpot, set to be drawn on Friday. The projected prize would be the second-largest payout in U.S. lottery history. A lone winner taking the cash lump sum would receive about $513 million.
Mega Millions announced that Tuesday's jackpot of $667 million would have been a new record for that game. The only larger lottery payout was a Powerball drawing for $1.59 billion in January 2016. Three winners split that.
The Mega Millions numbers drawn on Tuesday were 3, 45, 49, 61, 69, and a Mega Ball of 9. Nine people matched all five white balls. Eight won $1 million each, and another also got the Megaplier to win $5 million.
Before the drawing Tuesday, the previous Mega Millions record jackpot was $656 million, which was shared by winners from Kansas, Illinois and Maryland in March 2012.
"It's always a thrill to have both jackpots rolling, but there's an extra spark now with Mega Millions reaching a new record," Gordon Medenica, Mega Millions lead director and Maryland's lottery and gaming director said in a statement on Tuesday. "Everyone is talking about the jackpot and running out to buy tickets for tonight's drawing."
The Mega Millions jackpot has skyrocketed since the July 24 drawing when a group of 11 coworkers in Santa Clara County, California, shared a $543 million jackpot, the game's fourth-largest.
More than $1 billion in combined potential prize money remains up for grabs, with tonight's Powerball prize estimated at $345 million — or a one-time cash prize of nearly $200 million.
Copyright © 2018, ABC Radio. All rights reserved.