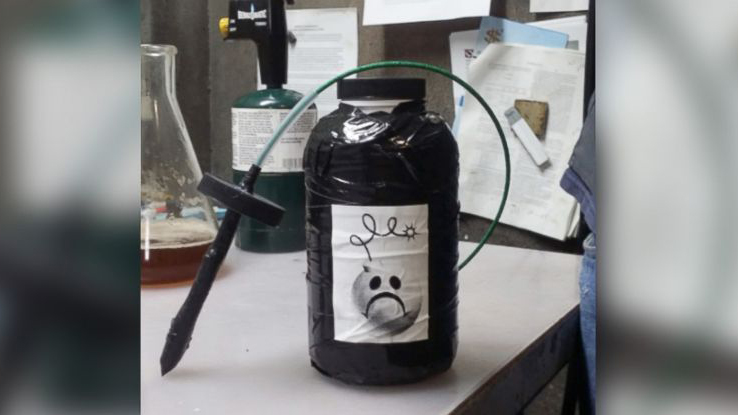 Bucks County District Attorney's Office(PHILADELPHIA) — Amid an ongoing investigation into a spate of mysterious explosions that shook northeastern Pennsylvania earlier this year, authorities warned residents there could still be explosives in the area.
The warning comes after investigators learned some explosive devices allegedly deployed by a couple across a rural part of Bucks County several months ago may have failed to detonate and could still be live.
"This is more an FYI than an SOS," Bucks County District Attorney Matthew Weintraub said in a statement Tuesday. "Nonetheless, we will continue to do our best to protect you by working hard to find any unexploded devices that may remain. If you find something suspicious, please do not investigate it on your own. Call 911."
The Bucks County District Attorney's Office released images of devices that authorities have seized thus far in the investigation, including one that looks like a small, black round bomb with a long, green wick. Others appeared to be contained in white or dark-colored bottles, also with long, green wicks.
The multi-agency probe remains active as authorities, including the Pennsylvania State Police, the FBI and the federal Bureau of Alcohol, Tobacco, Firearms and Explosives, continue searching for any and all devices allegedly crafted and distributed by David Surman Jr. and his girlfriend, Tina May Smith.
Surman and Smith, both 31, face a slew of criminal charges stemming from the investigation into reports of about 30 explosions within a five-mile radius of upper Bucks County from early April to late June, many of which occurred near the couple's home in Milford Township, authorities said.
The investigation has largely focused on the greater Quakertown area, especially Milford Township, as well as near Ottsville and Upper Black Eddy.
Upper Black Eddy resident Nick Zangli said he first heard the loud booms on May 12 before dawn, causing him to jump out of bed.
"I happened to be awake and it scared the heck out of me," Zangli told ABC owned-and-operated station WPVI-TV in Philadelphia. "It was definitely a very large explosion."
Surman, who owns a Quakertown-based chemical company, was arrested June 28 and charged with making or possessing bombs, as well as several related offenses, after authorities discovered four bombs at his residence, along with suspected methamphetamine and drug paraphernalia.
Ten firearms and an array of chemicals used in the assembly of bombs were also seized from Surman's home, according to charging documents.
The largest of the bombs "was over 18 inches in length, had four fuses all twirled together and was ready to be detonated," Weintraub told reporters at a press conference that day.
Forensic analysis of the seized materials has since linked Surman to evidence collected at several of the blast sites, according to the district attorney's office.
Surman was released from jail after posting 10 percent of his $750,000 bail, WPVI-TV reported. But he was arrested again on Oct. 10 and charged with possessing child pornography after a search of his seized computer uncovered dozens of illicit images and videos, according to an affidavit of probable cause.
Surman was released after posting 10 percent of his $500,000 bail, WPVI-TV reported.
Last Friday, Surman's girlfriend was arrested and charged as a co-conspirator. Smith allegedly drove while Surman threw the improvised explosive devices out the window of the vehicle. Smith told authorities she was with her boyfriend on three such occasions, according to an affidavit of probable cause.
Smith was released from jail after posting 10 percent of her $1 million bail. She and Surman are awaiting their next court appearance.
A trial date has not been set at this time, according to WPVI-TV.