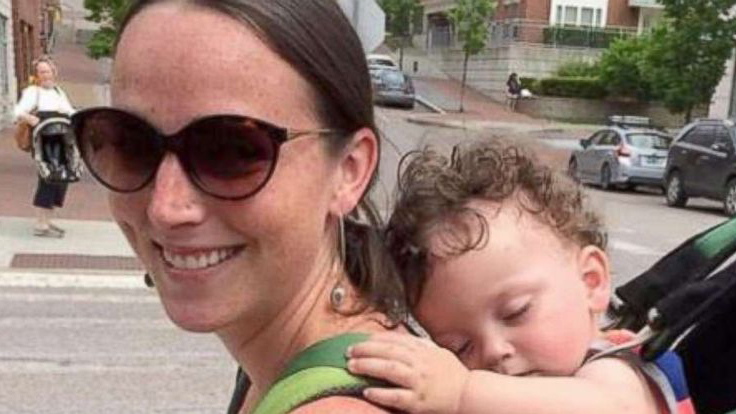 Courtesy Kate O'Neill(NEW YORK) — Madelyn Linsenmeir was a mother, sister and friend, who was "hilarious, and warm, and fearless, and resilient." She was also an opioid addict.
Linsenmeir was a junkie for 12 years and, at what her sister said were some of her darkest points, she would sometimes panhandle for money. She lost custody of her young son because of her disease.
On Oct. 7 the 30-year-old died in the hospital while in police custody, according to her sister, Kate O'Neill.
O’Neill does not want Linsenmeir to be remembered for her addiction. Her surprisingly honest obituary she wrote for a local Vermont paper is getting widespread attention for its warmth and candor.
“It is impossible to capture a person in an obituary, and especially someone whose adult life was largely defined by drug addiction. To some, Maddie was just a junkie — when they saw her addiction, they stopped seeing her. And what a loss for them. Because Maddie was hilarious, and warm, and fearless, and resilient,” O'Neill wrote.
She explained how Linsenmeir loved her son Ayden and how she “sang rather than spoke to him, filling his life with song.”
“After having Ayden, Maddie tried harder and more relentlessly to stay sober than we have ever seen anyone try at anything. But she relapsed and ultimately lost custody of her son, a loss that was unbearable,” she continued.
O'Neill said the obituary honored her sister but also spoke about the realities of drug addiction — which she hopes others can learn from.
“I want us to have empathy for people in their darkness whether that’s Maddie panhandling in the grocery store parking lot, whether it’s a junkie passed out on the street,” O’Neill told ABC News. “Those people are also Maddie.”
The obituary has since gone viral. But there have also been critics.
Brandon del Pozo, the police chief in Burlington, Vermont, where Linsenmeir and her family were raised, wrote on Facebook that he has “a problem” with it.
“Why did it take a grieving relative with a good literary sense to get people to pay attention for a moment and shed a tear when nearly a quarter of a million people have already died in the same way as Maddie as this epidemic grew?” del Pozo said in his post.
“Ask the cops and they will tell you: Maddie's death was nothing special at all. It happens all the time, to people no less loved and needed and human,” he added, posting a series of steps that the Burlington police department is taking to address drug addiction.
O'Neill said the outpouring of support for her sister has “been incredible and it’s been bittersweet.”
“We knew we weren’t alone and I think the part that’s bitter sweet about this is that it really is concrete evidence of the number of people that are affected by this disease. Our grief is so intense and so personal but it is not unique,” O’Neill said.
She has taken the negative feedback in stride.
“This disease needs a face and Maddie is just one face,” she said.
O'Neill asks those who are interested in stopping opioid addiction to donate to the Turning Point Center, “a place where Maddie spent time and felt supported.”
Gary De Carolis, the center's executive director, said the staff has been “overwhelmed” with donations after the obituary was published.
“We’ve never experienced anything like this in the history of the center,” De Carolis told ABC News.
De Carolis said he applauds the courage of Linsenmeir's family to be so forthright about her disease.
“The thing for me, the family … they had the courage to tell Maddie’s story and put a face on the scourge of addiction. That will change how America and the world view people who are struggling with addiction. We’re all people first, and some of us unfortunately have to deal with this,” De Carolis said.
The exact cause of Linsenmeir's death is still unknown. O'Neill said drugs may not have killed her, noting that she was in police custody at the time. Linsenmeir's death could very well not be counted in a government statistic. Just like so many others who die of overdoses, O'Neill said.