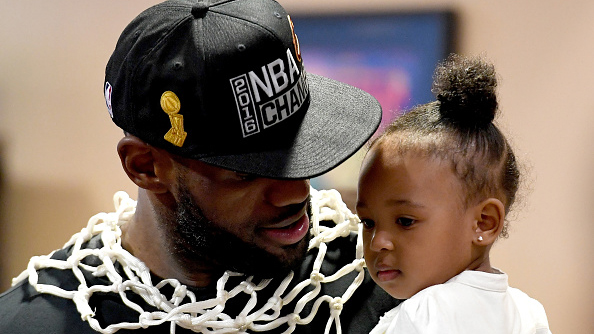 Thearon W. Henderson/Getty Images(LOS ANGELES) — She's only 3 years old, but LeBron James' daughter Zhuri is already making a name for herself online.
The King has been posting about her a lot recently, whether it be style, her ability to be sassy, or just her doing a "Frozen" duet with dear-old dad.
On Tuesday, the NBA Champion and all-time great wrote, "She controls the music when she rides with me. The Boss aka Baby 'Love is an Open Door' from Frozen soundtrack #MyPrincess."
In the ridiculously adorable clip, little Zhuri sings along with the soundtrack, while dad bobs his head and smiles.
In just about a day, it's gotten more than 5 million views.
But she's not just a good singer! Zhuri wowed at the "Smallfoot" premiere last month, rocking a denim dress on the blue carpet.
Around the same time, James added another post, boasting about his little girl.
"How is my 3 year old this fashionable though?!?! She asked if she could dress herself today for school. Man what!! She’s AMAZING!! #PrincessZ," he wrote.
He's right, how is a 3-year-old so fashionable? Someone call "Project Runway."
Zhuri isn't new to the spotlight though. In 2016, after James won the NBA Finals, he brought her to the media room and the reporters saw how much of a doting father he was.
It's very reminiscent of Riley Curry's rise to fame.
So, while their dads battle it out on the court, Riley and Zhuri will just be hanging out, bringing the cute comic relief.