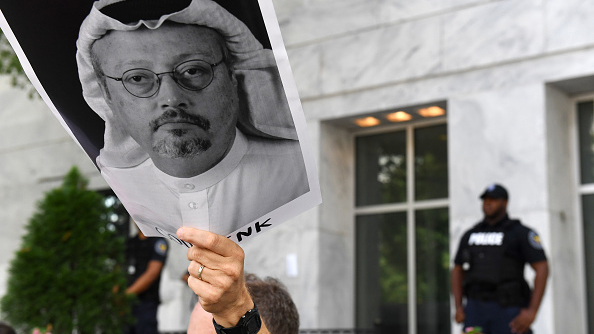 Matt McClain/The Washington Post via Getty Images(WASHINGTON) — Saudi Arabia's young crown prince is again denying any involvement in the disappearance of Washington Post columnist Jamal Khashoggi, according to President Donald Trump, who tweeted that he spoke with him and Secretary of State Mike Pompeo Tuesday after dispatching the top U.S. diplomat to the region amid international outrage over Khashoggi's possible death.
"Answers will be forthcoming shortly," Trump added.
In photo-ops with King Salman and Crown Prince Mohammed bin Salman, Pompeo greeted them warmly, even as the Saudis weigh whether to accept culpability for Khashoggi's death, a source with knowledge of their discussions told ABC News.
It was unclear what explanation they would give or when that statement would come, but Turkey has said they believe Khashoggi was killed in the Saudi consulate in Istanbul.
The Saudis have fiercely denied that charge, with the Trump administration urging caution until an investigation can take place. But while the Saudis said Khashoggi left the consulate and disappeared later, there's no evidence that he ever exited the compound after entering 14 days ago.
Pompeo "made clear" to the Saudis that Trump takes the case very seriously, according to State Department spokesperson Heather Nauert, who called his meetings "both direct and candid."
But Trump seemed to have an answer he approved, tweeting that with Pompeo joining him on the phone, Crown Prince Mohammed bin Salman "totally denied any knowledge of what took place in their Turkish Consulate… He has already started, and will rapidly expand, a full and complete investigation into this matter."
On Monday, he said "rogue killers" could be responsible, even though there has been no confirmation yet that Khashoggi is dead.
Pompeo will head to Turkey's capital Ankara on Wednesday to discuss Khashoggi's case with Turkish officials, including Foreign Minister Mevlüt Çavusoglu.
In his first meeting Tuesday with King Salman, Pompeo had words of thanks, Nauert said, for Saudi's "strong partnership" and "his commitment to supporting a thorough, transparent, and timely investigation." The importance of that investigation was something Pompeo and Crown Prince Mohammed bin Salman also agreed on, Nauert said.
But it's the crown prince or "MBS," as he is sometimes known, that members of Congress and other U.S. officials worry ordered the plot against Khashoggi.
Painted as a bright, young reformer who has opened up Saudi Arabia to movie theaters, sporting events, and women driving, the crown prince has also overseen a crackdown on political opposition, including by arresting several wealthy Saudi princes, and activists, including women's rights advocates.
Media reporting of his alleged involvement in Khashoggi's disappearance and possible death has strengthened that darker image of a ruthless young leader.
"I'm not going back to Saudi Arabia as long as this guy's in charge," said Republican Sen. Lindsey Graham of South Carolina, a staunch supporter of U.S.-Saudi relations and close ally of Trump's. "This guy is a wrecking ball. He had this guy murdered in a consulate in Turkey, and to expect me to ignore it – I feel used and abused."
"I'm going to sanction the hell out of Saudi Arabia. You know, we deal with bad people all the time, but this is in our face. I feel personally offended. They have nothing but contempt for us," Graham told Fox News Tuesday, adding the crown prince "has got to go."
That kind of language was once unheard of from a high-level Republican official, especially one as senior in foreign policy circles.
The tone from Pompeo's trip was noticeably different. He smiled and shook hands with King Salman and the crown prince, with whom he joked about jetlag.
"We are really strong and old allies, so we face our challenges together — the past, the day of, tomorrow," MBS told Pompeo, who nodded along and responded, "Absolutely."
Pompeo's meetings during the day all lasted around 30 minutes, but in the evening he'll have dinner with the crown prince, which is expected to be a longer affair.
Ahead of Pompeo's visit to Ankara, the U.S. had welcomed Turkey and Saudi Arabia announcing a "joint inspection" of the consulate, and the first Turkish police officials were able to enter the compound Monday.
So far the investigation has not yielded any publicly released results, but an official told ABC News on Monday that the Saudis are considering whether to claim involvement.
The U.S. has declined to comment on that possibility.