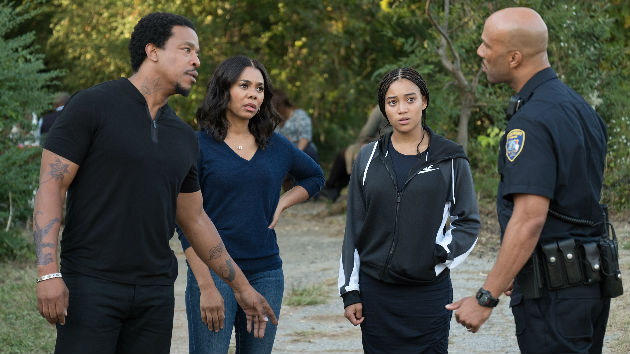 L-R: Russell Hornsby, Regina Hall, Amandla Stenberg, and Common in Twentieth Century Fox’s THE HATE U GIVE. Photo Credit: Erika Doss.(NEW YORK) — Russell Hornsby is extremely familiar with the type of man he portrays in the upcoming Black Lives Matter-inspired film, The Hate U Give.

Taking on the role of the gritty and often unyielding Maverick Carter — an ex-con and father who Hornsby describes as a "byproduct" of society — is a character that the actor admits is unfortunately representative of the many black men who are consistently ignored by the world in which they live.

"It was told to me a while back that there was a time when boats were made of wood and men were made of steel," Hornsby tells ABC Radio. "And I think that Maverick represents that type of man — who was brought up in a world where they didn't place value on who he is or who he was as a man."

He continues, "And, so therefore, he had to take alternative means in order to make it in this world. And as a byproduct of that — you do some illicit things. And he ended up in the system."

While Hornsby's character offers a glimpse into the complex life of a black man, Hornsby also says Maverick demonstrates the love and protectiveness of a father, which the world needs to know "exists."

The Hate U Give hits theaters nationwide on October 19.