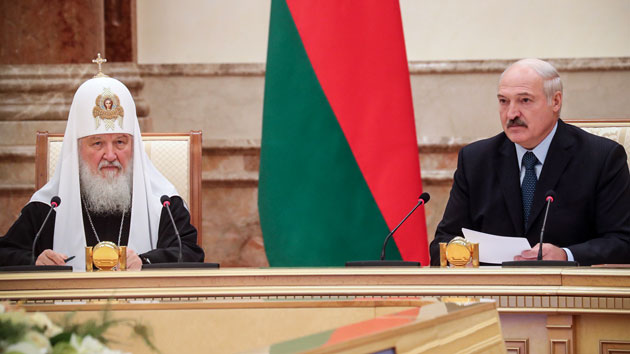 NIKOLAY PETROV/AFP/Getty Images(MINSK, Belarus) — Officials from the Russian Orthodox Church have announced that the church is severing relations with the Patriarchate of Constantinople, in what is being seen as one of the biggest schisms in Orthodox Christianity in almost a thousand years.
At a synod in Belarus on Monday, Russian Orthodox Church leaders said the church was cutting ties with the Ecumenical Patriarchate of Constantinople, the seat of the global spiritual leader for 300 million Orthodox worshippers.
The rupture is a response by the Russian Church over the Constantinople Patriarchate’s decision last week to recognize the Ukrainian Orthodox Church as an independent church — no longer under the authority of the Moscow Patriarchate, according to church officials.
Bartholomew I of Constantinople, considered the ‘first among equals’ of eastern Orthodoxy’s church leaders, granted what is known as ‘autocephaly’ (self-governance) to the Ukrainian Church, over the fierce objections of Moscow.
Metropolitan Ilarion, the Moscow Patriarchate’s head of external relations, on Tuesday said that in doing so the Constantinople Patriarchate had destroyed its authority and that the Orthodox Church no longer had a single center.
“We now stand before a new church reality: we no longer have a single coordinating center in the Orthodox Church and we must very clearly recognize that,” Ilarion said in a televised interview on Russia’s main state broadcaster, Channel 1.
“The Constantinople Patriarchate liquidated itself as such a center,” he said.
The split marks a historic turning point for the global Orthodox community, but it is the result of the collapse in relations between Russia and Ukraine of the past four years that followed Moscow's seizure of Crimea in 2014 and the subsequent separatist war in eastern Ukraine, which is ongoing.
Ukraine’s government has lobbied for an independent church on the grounds that the Russian Orthodox Church is an instrument of the Kremlin, accusing it of stoking separatist sentiment in eastern Ukraine and of acting on behalf of Russia's intelligence services.
Bartholomew’s decision recognized a Ukrainian church that had sought to break from the Moscow Patriarchate since 1991, when Ukraine gained independence from the Soviet Union. Ukraine’s government hailed the recognition as major step in bringing Ukraine further out of Russian dominion.
“This is a matter of our independence," Ukraine’s president Petro Poroshenko said in a speech celebrating the recognition on October 11. "A matter of our national security. A matter of our statehood. A matter of the entire global geopolitics.”
“This is the fall of the ‘Third Rome’ as the most ancient conceptual claim of Moscow for global domination,” Poroshenko said, referring to a claim made by Russian nationalists for centuries that the country is the heir to the Roman and Byzantine Christian empires.
The Moscow Patriarchate, however, has denounced the Ukrainian church’s recognition as provoking a split comparable to the so-called ‘Great Schism’ of 1054, when Christianity separated into western and eastern churches.
The Russian church is by far the largest of the world’s Orthodox communities and for most of its centuries-long history has been closely tied to the Russian state. President Vladimir Putin has promoted the church as a key part of modern Russian identity and its leader, Patriarch Kirill, is a close ally of the Russian leader.
The Russian church's breakaway is therefore a major upheaval for global Orthodoxy. The practical implications were still being worked out by ecclesiastical experts on Tuesday, but Russian church officials suggested the most immediate effect would be that its faithful should no longer attend services at churches under the authority of Constantinople. That would include one of the holiest sites in Orthodoxy, the Greek island monastery, Mount Athos.
Archpriest Igor Yakimchuk, the Moscow Patriarchate’s deputy head of external relations, told the Interfax news agency that Russian worshippers visiting those churches, many of which are popular tourist sites in Greece and Turkey, would have to make penance with confession afterwards, but church officials seemed to suggest there is no total ban. Russian Orthodox priests are now forbidden from taking part in services there and would be punished, Yakimchuk said.
The Moscow Patriarchate and Constantinople have had strained relations for some time as Moscow has sought to expand its authority within Orthodoxy. In 2016, Patriarch Kirill met Pope Francis in Cuba, the first time a Russian Orthodox patriarch and a Roman Catholic Pope have done so in 1,000 years — in what was seen by some experts as a power play by the Russian church.
Copyright © 2018, ABC Radio. All rights reserved.