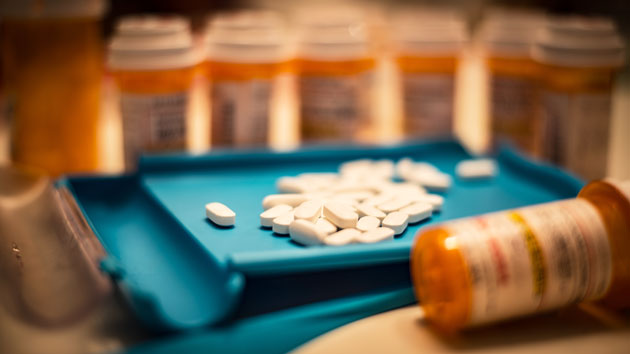 iStock/Thinkstock(WASHINGTON) — The Trump administration said Monday it plans to require drug makers to start disclosing its prices in television advertisements, a move that prompted immediate pushback from the pharmaceutical industry and raised questions about whether that would translate to lower drug costs for consumers.
The proposed new rule says anyone selling most drugs paid for by Medicare or Medicaid would have to divulge a "list price" in television ads using "legible text." That means the price would have to be printed on the screen big enough to read, and not just read quickly read by a fast-talking announcer.
The spike in drug costs for U.S. consumers, particularly seniors, was a 2016 campaign issue for President Donald Trump. In a cabinet meeting last year, the president accused the industry of getting away with "murder." Trump's health secretary, Alex Azar, is a former executive at pharmaceutical giant Eli Lilly and Co., which faced criticism during his tenure for raising prices for its insulin products.
Azar on Monday said the drug industry "remains resistant to providing real transparency" on pricing.
"Patients deserve to know what a given drug could cost when they’re being told about the benefits and risks it may have," Azar said in a speech Monday at a forum hosted by the National Academy of Medicine. "They deserve to know if the drug company has pushed their prices to abusive levels. And they deserve to know this every time they see a drug advertised to them on TV."
List price is typically considered the sticker price of a drug and doesn't take into account rebates or discounts. The Health and Human Services Department says the rule would apply to any company advertising on television for prescription drug and biological products paid for by Medicare or Medicaid with a list price greater than $35 for a month's supply or usual course of therapy. The agency says the 10 most commonly advertised drugs have list prices ranging from $535 to $11,000 per month or usual course of therapy.
The new rule isn't final. The proposal will be released for public comment, and those comments will be taken into consideration before a final rule is enforced.
The administration says this plan could affect almost every American. Patient costs are typically calculated using the list price, even if a person has insurance. And some 47 percent of Americans have high-deductible health plans, according to HHS, which require that a patient pay the list price until their insurance kicks in.
Senior officials at the Department Health and Human Services said they don't believe they would face challenges in court by drugmakers claiming the rule violates their First Amendment rights because there are other, similar requirements on advertisements. But it's likely that drug companies will use its deep pockets to fight back. Pharmaceutical companies contend that life-changing drugs typically require years of expensive research — work that won't be done if there isn't adequate compensation.
Holly Campbell, a spokeswoman for the Pharmaceutical Research and Manufacturers of America, a trade association known as "PhRMA," said the group is still digesting the announcement but she suggested industry executives aren't happy.
"We think there is a better way to provide patients with medicine cost information," she said.
But whether the plan would prompt drug companies to lower prices remains to be seen. Officials said they would enforce the rule using both public shaming — a list would be published of companies that defy the regulation — and legal action.
Drug companies were clearly trying to fend off any government regulation. Shortly before Azar's announcement, PhRMA announced a plan in which companies would take to direct consumers to websites that would list drug prices.
Azar called the industry announcement "no coincidence" and said, "we appreciate their effort."
"But placing information on a website is not the same as putting it right in an ad, and it’s taken them five months since the president’s blueprint (to address drug pricing) to start skating to where the puck is going," he said.
Copyright © 2018, ABC Radio. All rights reserved.

One Medical vaccine supply cut off in five counties after ineligible patients skipped the line
COVID-19 vaccine testing on children: What scientists want you to know
Michael Cudlitz on getting to know his character, and escaping COVID, with ‘Clarice’
What women need to know about fertility and COVID-19 vaccines
Carbon monoxide poisoning: Here’s what you need to know
What pregnant, breastfeeding people should know about COVID-19 vaccines