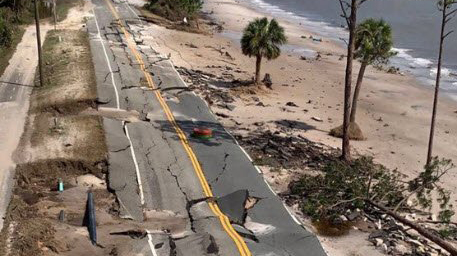 @DukeEnergy/Twitter (MEXICO BEACH) — Hurricane Michael's death toll has climbed to 26, with 16 people dying in Florida, according to state officials. Twelve of those deaths were in Bay County, which was hit hard by the monster Category 4 storm.
Michael made landfall near Mexico Beach in Bay County Wednesday with winds around 155 mph, decimating nearly every home and business in the small seaside community, including the Mexico Beach Police Department.
"We don't have a building — from my understanding, the water surge moved it off its foundation," Police Chief Anthony Kelly told ABC News on Friday.
When Emily Mitchell returned on Saturday afternoon to see what was left of her family's Mexico Beach home, she found the roof ripped off and the walls blown in. She called it a "total loss."
As Michael barreled up the coast, it brought death and destruction with it, leaving 10 people dead in Georgia, North Carolina and Virginia.
Among the victims were an 11-year-old girl in Georgia and a firefighter in Virginia.

Court mulling whether to reinstate 3rd-degree murder charge against Derek Chauvin in George Floyd’s death
VCU fraternity under investigation after death of freshman student
Three people dead after plane crashes in Georgia, leaving wing inside mobile home
Trailblazing beauty inventions and innovations made possible by people of color
Michael Cudlitz on getting to know his character, and escaping COVID, with ‘Clarice’
People with antibodies after COVID-19 may have short-term virus protection: Study