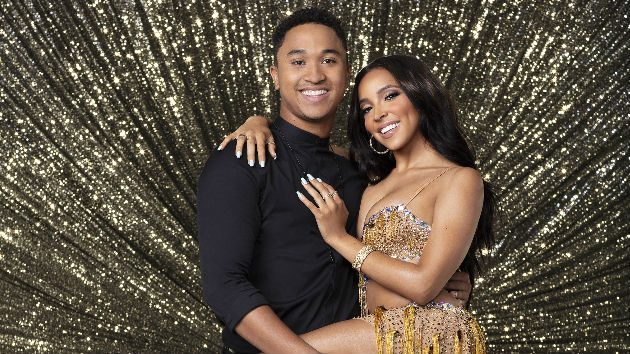 ABC/Craid Sjodin(LOS ANGELES) — Dancing with the Stars’ Trio Night showcased the power of three, but in the end, the show had to let two go as Tinashe and her pro partner Brandon Armstrong were shockingly sent home.
The R&B singer and her partner were voted out even though they consistently danced well and received high scores from the judges. Their dance last night, a courtroom-themed tango with former contestant Amy Purdy, scored a 26/30. As Brandon predicted in last week’s episode, sometimes the best dancers are the first to go.
For some, the special guest dance partner during Trio Night was a welcome addition and for others it was painful — literally.
Demarcus Ware had his finger accidentally dislocated by his surprise dance partner Rashad Jennings in a chest-bump-gone-wrong. After getting patched up at the ER, he performed a football-themed paso doble with former DWTS champ Rashad and Lindsay Arnold.
“Grocery Store Joe” Amabile’s salsa with partner Jenna Johnson and fellow Bachelorette contestant Jordan Kimball was painful in a different way. Set to “I’m Too Sexy,” the routine — which featured ripped shirts, overalls, and a cold shower ending — was the worst of the night, scoring a dismal 15/30.
The best dance of the night goes to Milo Manheim and his partner Witney Carson, joined by Riker Lynch. They did a spicy salsa with extra hairography and wowed the judges into giving them a nearly perfect score of 29/30.
Here are the scores:

Dancing with the Stars returns next Monday at 8 p.m. ET on ABC.