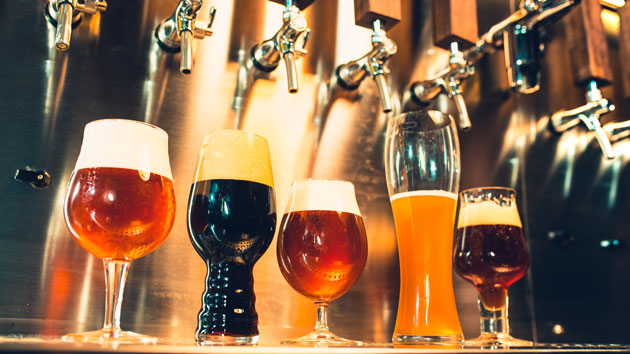 iStock/Thinkstock (IRVINE, Calif.) — This is not a drill: As climate change worsens, there could be a beer shortage.
A study published Monday that looked at beer's growing popularity and a potential decline in barley harvests linked to climate change showed prices for beer could double, or even triple, in countries including the U.S.
The research was compiled by Nathan Mueller and Steven Davis, assistant professors of Earth system science at UC Irvine, Dabo Guan of the department of Earth system science at Tsinghua University and Jie Pan from the Institute of Environment and Sustainable Development in Agriculture in China.
Extreme heat and drought could ravage harvests of barley, a key ingredient in beer. "Average yield losses range from 3 to 17 [percent] depending on the severity of the conditions," according to the study.
In the U.S., this could mean a reduction of hundreds of millions of gallons of beer.
The game-changing study was published in the U.K. journal "Nature Plants."
The study also said that extreme-heat events linked to a reduction in barley production are years away, as the scientists' models looked well into the current century.
"Although the effects on beer may seem inconsequential in comparison to many of the other — some, life-threatening — impacts of climate change, there is nonetheless something fundamental in the cross-cultural appreciation of beer," the study said. "For perhaps many millennia, and still at present for many people, beer has been an important component of social gatherings and human celebration."
It continued: "Although it may be argued that consuming less beer is not disastrous—and may even have health benefits—there is little doubt that for millions of people around the world, the climate impacts on beer consumption will add insult to injury."
On Monday, Mueller tweeted: "Our new paper reveals a frightening impact of climate change extremes: decreasing beer supplies and large price increases. Yet another reason to decrease [green house gas] emissions!"
Guan also took to social media to joke around a bit — and send a few warnings.
"Not to encourage you to drink more today! But you know what you need to do," he wrote, adding, "Beer is the key for social stability."
You could say that again.
Copyright © 2018, ABC Radio. All rights reserved.

US, Canada to hold climate talks, paving road to Biden’s Earth Day summit
Climate change, rising sea levels to increase cost of flood damage by $34B in coming decades: Report
Fire breaks out in Texas hotel as sprinkler system fails due to frozen pipes from winter storm
6 million doses of vaccine delayed due to winter weather
FKA Twigs explains why she’s speaking out about alleged abuse: “It can happen to anyone”
Paris Hilton announces engagement to boyfriend Carter Reum: “Yes to forever”