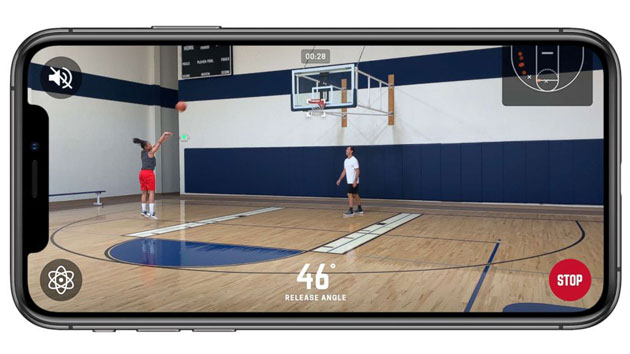 Homecourt(NEW YORK) — An iPhone app that uses artificial intelligence to give any basketball player a professional-level breakdown by tracking the speed, height and angles of, say, a jump shot, launched Tuesday.
HomeCourt is a shot-tracking app that was featured at Apple's annual event in September. It was introduced by former NBA MVP Steve Nash, an investor and adviser to the company that created it, NEX. Although the app debuted in July, it's this new version that features "shot science" — analyses using six metrics — that pairs with the powerful new cameras in the new iPhone models.
"HomeCourt is giving players immediate feedback to help them understand if they are practicing with the right form," Nash said on the Apple stage. "Release time is also a great indicator of whether the player is shooting at game speed while staying low. These meaningful insights and feedback just weren't possible before."
In addition to the release time of the shot, the player's approaching speed, the angle at which the ball is released, the angle of the bend in the player's legs and the height of the legs off the ground are diagnosed to improve shots in real time. This level of critique, NEX CEO Dave Lee said, can't be seen by the naked eye.
"This type of technology has only been available to the elite pro athlete — the NBA player — until recently. We're making it available to everybody," NEX co-founder Alex Wu told ABC News. "What happens when some 13-year-old kid in Hong Kong or the rural U.S. has this technology at the palm of their hand?"
Currently a few NBA teams, including the Boston Celtics and Philadelphia 76ers, and college teams such as Duke, Stanford and the University of Florida use the app, Wu said. They pay the same price as any other user.
"There's a team subscription — some buy 15 or 25 accounts and bundle them together — but everyone is paying the same price, and we did it that way on purpose," Wu said.
In addition to Nash, investors in the $4 million seed round that closed in July include Marc Cuban, Sam Hinkie and Jeremy Lin.
At least one tech analyst remained cautious about heralding a completely new world boosted by augmented reality.
"On the one hand it's compelling, showing people who are watching what can be done on 'just a phone,' which is really cool, doing all of this on the device, said Gartner Group's Tuong Nguyen. "It’s inspirational."
"On the other hand, is this going to usher in augmented reality in the millions? The answer is, 'No,'" Nguyen said.
Dean Oliver, a basketball statistician who has consulted with NBA teams, pointed out that app itself isn't guaranteed to make someone a star player.
"The concept that consumers can do large-scale data collection is one that is important in the AI/computer vision world," Oliver said. "Doing this beyond [a] basic fitness app is something whose time has come.
"But note that it is just 'data' collection, not analysis, not instruction. It uses complex analysis to collect data for users, but will it really make players better? That's to be determined. But getting consumers the data is a big step towards those applications."
The initial version of HomeCourt that debuted in July only featured shot tracking and location. It has been downloaded in 120 countries and five million shots have been recorded in the last few months.
The app is currently only available on IOS devices, from the iPhone 6 to newer models, but the "shot science" is only available for the newest generation of iPhones. Wu said the company is planning to expand to Android devices in the future.
Wu said he hoped HomeCourt could "revolutionize the game" to allow more people to access and excel at the sport.
"It's for any aspiring player or somebody who loves basketball — NBA teams to 13-year-old kids," he said.
Copyright © 2018, ABC Radio. All rights reserved.