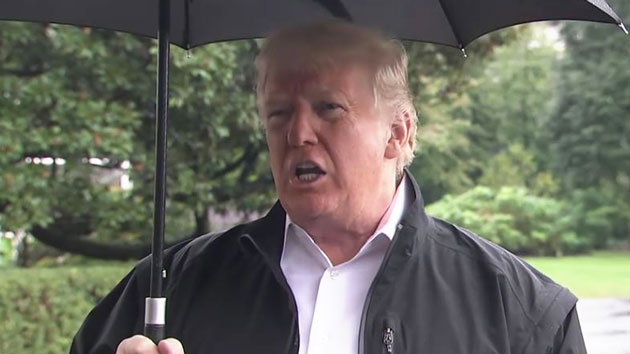 ABC News(WASHINGTON) — President Donald Trump told reporters that "rogue killers" may be involved in the disappearance of independent journalist Jamal Khashoggi, a Saudi citizen who has been living in the U.S.
The president's comments Monday morning came after he spoke to Saudi Arabia's King Salman, who, Trump said, "denies any knowledge" about Khashoggi's disappearance.
"The king firmly denied any knowledge of it,” Trump said to the press after his phone call with the Saudi king. “He didn't really know, maybe, I don't want to get into his mind but it sounded to me like maybe these could have been rogue killers, who knows?”
Pressed on whether he believed King Salman’s denials, the president wouldn’t say.
“All I can do is report what he told me. He told me in a very firm way that they had no knowledge of it. He said it very strongly,” Trump said. “His denial to me could not have been stronger, that he had no knowledge. It sounded like he and also the crown prince [Mohanmmed bin Salman] had no knowledge.”
Trump also said that Secretary of State Mike Pompeo is leaving "literally within an hour" for Saudi Arabia, and possibly other countries.
Khashoggi, a self-exiled Saudi journalist and prominent critic of the Saudi crown prince, was last seen entering the Saudi consulate in Turkey on Oct. 2 to obtain documents he needed to get married. Turkish authorities have claimed he was murdered in the consulate by Saudi operatives, an allegation the Saudi government has consistently denied.
Tensions grew over the weekend between Washington, Turkey and Saudi Arabia over the disappearance of Khashoggi, who was a contributor to The Washington Post.
President Trump in a "60 Minutes" interview that aired over the weekend said of the alleged murder, “There’s something really terrible and disgusting about that if that were the case. So we’re going to have to see. We’re going to get to the bottom of it, and there will be severe punishment” if the Turkish claims are true.
In an apparent response to Trump’s comments, a Saudi official said that if any moves were taken against the kingdom, “it will respond with greater action … The Kingdom’s economy has an influential and vital role in the global economy,” Reuters reported.
Trump's comments Monday came as Saudi officials and Turkish investigators were conducting a joint inspection of the Saudi consulate in Istanbul for clues to Khashoggi's whereabouts, The Associated Press reported.

Saudi officials arrived in Turkey on Friday after the two governments agreed to a joint investigation into the case, with Saudi officials granting Turkish investigator access to the consulate building, Reuters reported.