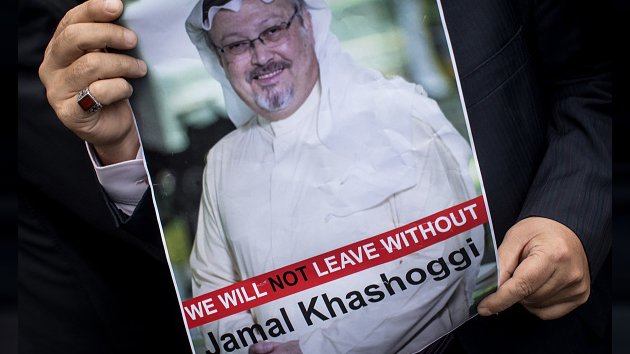 Chris McGrath/Getty Images(WASHINGTON) — Since self-exiled Saudi journalist Jamal Khashoggi walked into the Saudi Arabian consulate in Istanbul this month and vanished, his case has sparked international intrigue and outrage and put leaders of his homeland on the defensive.
Here is a timeline of events before and after he disappeared:
May 2018: Khashoggi meets Hatice Cengiz, a 36-year-old Turkish Ph.D. student, at a conference in Istanbul and she soon becomes his fiancée.
Sept. 28: Khashoggi visits the Saudi Consulate in Istanbul for the first time to pick up a permission document to marry Cengiz. He's told come back later.
Oct. 1: He returns to Istanbul from a trip to London.
Oct. 2: He goes back to the Saudi Consulate in Istanbul. Cengiz waits for him outside for four hours, but he never comes out and is told by consulate staff that he left out a back door. Cengiz contacts the Turkish police.
Oct. 7: Saudi government officials deny involvement in Khashoggi's disappearance after reports that he was killed.
Oct. 8: Sen. Lindsey Graham, R-S.C., warns the Saudis of consequences if the government is found complicit in Khashoggi's disappearance.
Oct. 9: Cengiz writes an op-ed in Washington Post, saying her husband-to-be had applied for U.S. citizenship and that his reason for visiting Turkey was to take care of all necessary paperwork for them to marry before he returned to Washington. She urges President Donald Trump and first lady Melania Trump to "help shed light on Jamal's disappearance." State Department spokeswoman Heather Nauert said of Khashoggi's disappearance, "We're not going to make any judgments about what happened to him. We don't know what has happened to him. We don't have any information on that.
Oct. 10: Trump makes his first comments on Khashoggi's disappearance, saying he contacted the Saudis and invited Cengiz to the White House. "We're demanding everything," he said. "We want to see what's going on here. That's a bad situation. And frankly the fact that it's a reporter you could say in many respects it … brings it to a level. It's a very serious situation for us and this White House. We do not like seeing what's going on."
Oct. 11: The Washington Post, which Khashoggi writes for, reports the Turkish government told U.S. officials that it had audio and video recordings proving Khashoggi was killed inside the Saudi Consulate in Istanbul.
Oct. 13: Cengiz writes another op-ed, this one in the New York Times, on what would have been Khashoggi's 60th birthday, this time referring to him in the past tense as if penning his obituary. "Jamal and I had many dreams, but the most important one was to build a home together."
Oct. 14: In an interview aired on CBS's "60 Minutes," Trump addresses Khashoggi's disappearance. "There's something really terrible and disgusting about that if that were the case," he said, referring to allegations by Turkish authorities that Saudi Arabia was involved. "So, we're going to have to see. We're going to get to the bottom of it, and there will be severe punishment." In an apparent response to Trump's comments, a Saudi official said if any moves were taken against the kingdom "it will respond with greater action."
Oct. 15: Trump says he spoke with Saudi King Salman bin Abdulaziz Al Saud for 20 minutes and that the king "denies any knowledge" of what happened to Khashoggi. Trump suggests Khashoggi was targeted by "rogue killers" and says he is sending Secretary of State Mike Pompeo to Saudi Arabia to speak to the king. Meanwhile, Turkish police are allowed to search the Saudi consulate in Istanbul for the first time.