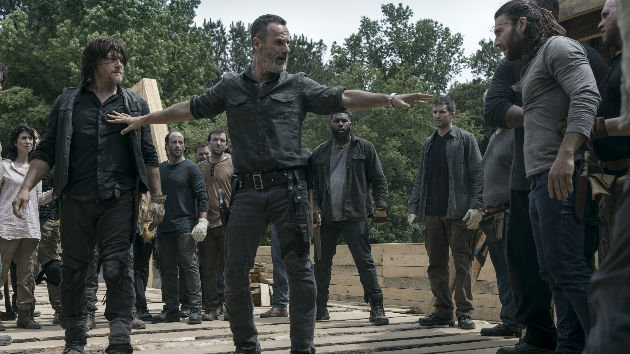 Jackson Lee Davis/AMC(NEW YORK) — (SPOILERS AHEAD)The second episode of season nine begins with Rick speaking to someone, looking at camera, detailing that as a unified community, they're thriving. "We're not letting this world define us anymore."

It's been some time since the bridge has begun construction; Ezekiel embraces Carol and tells her he needs to go back to the Kingdom. "This is just goodbye for now, I'm not giving up on my fairy tale."

Rick and Eugene plot with Rosita about blasting for the construction, meanwhile, they talk about Saviors who have walked off.

Back at Hilltop, Maggie tries to break a horse while Michonne comes to ask for more food, explaining the Sanctuary hasn't provided the fuel they promised was on its way. Maggie won't budge.

At the bridge, Daryl gets into it with Justin, one of the former Saviors, who shoves young Henry for rationing water.
Rick breaks up the scuffle and gets them back to work; he has faith the Saviors will fall in line.

At Hilltop, it's been a month since Earl tried to kill Maggie in a drunken stupor. He's still locked up, but his wife isn't happy about it. "I got no one else," she says defiantly.

Michonne tries to convince Jesus to talk to Maggie about it; she proposes the charter to him again. Later on, when Maggie is playing with baby Herschel, he brings it up again. "Negan, Gregory, Earl: you think I'm wrong about them."

"I think you're a good person, and good people can disagree," he says.

It works; Earl is reunited with his wife through a jail cell.

Near the bridge, Rosita and a former savior — one who sliced her face open months ago — get to blasting for the bridge. As expected, the noise from the explosion sends the walker herd in a different direction.

Back at Hilltop, Earl is talking with Maggie about his past as an alcoholic, and how he was able to get sober for 20 years. He asks why Maggie hanged Gregory and not him.

Elsewhere, Rick, Tara, and Gary attempt to distract the herd with a series of sirens, but one station doesn't sound theirs, which means the herd shambles into the good guys' lumber yard, forcing Daryl and everyone to scramble, taking down walkers; meanwhile, one of the Saviors drops his rope and sends a pile of logs rolling onto Aaron's hand. Rick and all come to their rescue, and he shoots a rope, sending a pile of logs rolling down a hill, mowing down walkers.

Aaron is evacuated, and back at the infirmary, Enid and Daryl are forced to amputate his arm.

Back at Hilltop, Maggie agrees to common laws between the communities, but says she won't sacrifice her power to do what she thinks needs to be done. Michonne agrees.

Rick kicks out Justin, the Savior with whom Daryl tangled, and who failed to sound the other alarm.

Rick bonds with Aaron, regretting he was injured. It was worth it, Aaron says, because he feels he's part of Rick building a new world.

Elsewhere, Father Gabriel and Anne continue to bond; they kiss amid the sound of frogs mating.

Rick looks over the camp; everybody getting along.

Carol asks Ezekiel if she could try "that old ring on." She doesn't want him to kneel, but accepts him putting it on with a warm embrace.

"It was a hard day," Rick continues to the confessional. "Thing is, though: bad as it was, when the day was done, they came together. Not all of them, but enough…chose to be together."

Then we see he's been boasting to Negan, through the bars in his jail cell. Negan is unmoved. "When it all goes to s***, and it will, you be sure to tell me about that day, too," his voice raspy confident as ever. "You're not saving the world, Rick. You're just getting it ready for me."

The episode closes with the excommunicated Savior Justin drunkenly walking away from the protection of the camp.

We see Anne, and then the Savior gets distracted by something in the woods on the side of the road. He draws a machete, but then is calmed by a friendly face: "You nearly got yourself killed!" he yells — before he's snatched into the darkness.

The Walking Dead returns next Sunday, October 21 at 9 p.m. on AMC.

COVID-19 won’t stop the longest competitive off-road rally in the US
Between the economy and coronavirus pandemic, Biden keeps his advantage nationally: POLL
Most say wait on Ginsburg seat, while opposing packing the court: Poll
‘Riverdale’s KJ Apa shows the reality of makeout scenes on set amid COVID-19
Meet the new baby female Masai giraffe born at Disney’s Animal Kingdom!
New heat wave with gusty winds forecast for the West