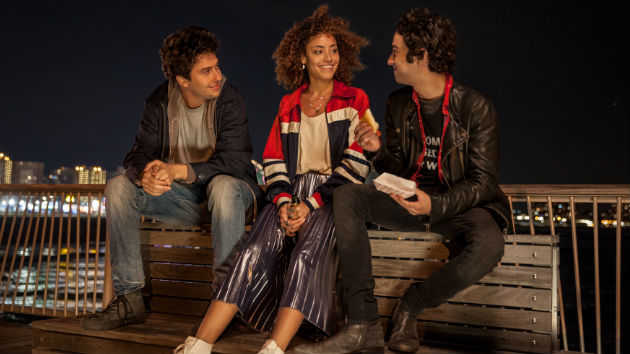 Not only do they play mother and sons in the movie, but Draper also wrote and directed the film, her husband Michael Wolff composed the music and the family’s rescue dog, Stella, stars in the title role.

While they’ve all worked together before – minus Stella – in Nickelodeon’s Naked Brothers Band, when Nat and Alex were kids, this was their first time the family had worked together as adults.

“I think we're just at a place where we all really respect each other and have confidence in our own abilities outside of the family,” Nat tells ABC Radio of working with his family. “So when we came back to do a movie together, it was like just working with people that you think are incredibly talented that you love spending time with.”

Stella, on the other hand, wasn’t as easy to work with.

“She was really abusing everyone on set,” Alex jokes. “It was a difficult process, in complete seriousness. Did not like working with her. Love her as a dog, but…”

The film revolves around Nat’s character, Jack, returning home from college to help his family give their elderly pooch a final send-off before she passes. While at home, his relationship with his younger brother Oliver is tested when they find out they’re both in love with the same girl.

While some of the elements of their real-life relationship made it into the film, Nat and Alex admit the closest they ever came to fighting over a girl in real life was when they both had a mutual crush on Kristen Stewart — though they never actually met her.

Stella's Last Weekend is out now in limited release — and don't worry: No dogs were harmed during the filming of the movie.