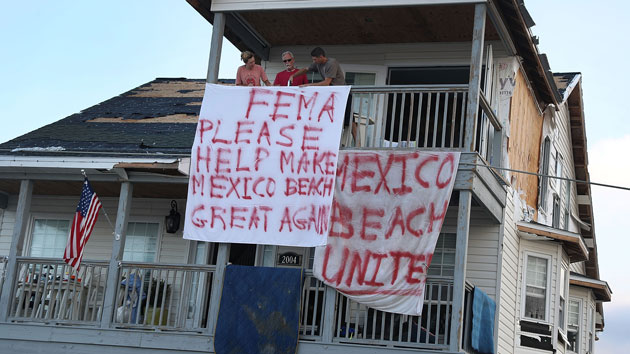 Joe Raedle/Getty Images(MEXICO BEACH, Fla.) — President Donald Trump and First Lady Melania Trump traveled to Florida and Georgia Monday afternoon to tour the devastation left in the wake of Hurricane Michael and to highlight the ongoing recovery efforts as dozens still remain missing in the wake of the deadly storm.
As he toured a ravaged neighborhood street in Lynn Haven, Florida, the president called it "total devastation."
"To see this personally is very, very tough,” Trump said, having observed badly damaged homes and trees that had been knocked off and pulled up by their roots.
“It seemed almost like a giant tornado, a really wide tornado,” Trump said as he spoke with the mayor of the city in front of cameras during his neighborhood tour.
The president, along with the first lady, Gov. Rick Scott, and the local mayor, greeted one resident Michael Rollins, whose home was visibly damaged – the roof had blue tarp over it, the front façade of the home was quite damaged, the yard was completely torn up, with lots of mud and trees ripped up by their roots.
At a relief distribution center, the president handed out water bottles and applauded the work of first responders, FEMA, and Gov Scott and marveled at the response effort.
“We are doing more than anybody would have ever done," Trump said. "And probably, there hasn’t been hits like this, not very often, they say 50 years there was one that had this kind of power, 50 years, that’s a long time.”
Speaking to reporters on the tarmac at Eglin Air Force Base in Okaloosa County, the president repeatedly touted the coordination with the local government said the priority is ensuring displaced residents are safe and have access to food and water.
“The job they've done in Florida has been incredible, and likewise I'm hearing in Georgia pretty good things,” Trump said. “Just making sure everyone's safe, that they're fed, you know many of these people, they have no – they have no home. Some of them have no trace of a home, you wouldn't even know it just got blown right off the footing. So our big thing is feeding and water and safety.”
In Georgia, the president visited a Red Cross center where he received a briefing from local leaders about the ongoing recovery efforts.
He visited a farm in Macon, Georgia, where he met with pecan and cotton farmers who told him about the damage to their crops and trees caused by the storm. In the case of some tree crops, it can take up to ten years before a destroyed tree can be replaced.
"You just got hit dead center?" Trump could be heard asking one farmer.
"That's a hell of a story," Trump told him after listening to his story. "You're going to make it."
"You're going to be okay, you watch," the president told another farmer after listening to his story.
Copyright © 2018, ABC Radio. All rights reserved.