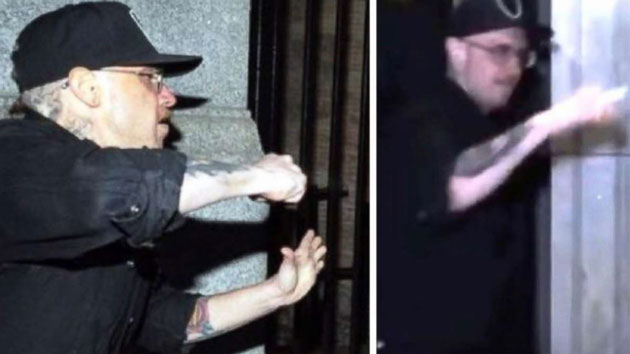 NYPD(NEW YORK) — Police released photos of three men allegedly involved in a violent clash between right- and left-wing protesters in New York City last week.
Investigators with the New York Police Department say the three took part in a brutal brawl Friday night between protesters and members of the right-wing Proud Boys organization, which has been designated as a hate group by the Southern Poverty Law Center.
Police said two of the people wanted for questioning were seen kicking a victim lying on the sidewalk and the other was observed punching a victim who was trying to run away.
New York Gov. Andrew Cuomo and NYC Mayor Bill de Blasio urged witnesses to speak up if they had any information about the fight.
“The NYPD is fully investigating last night’s attack involving the Proud Boys. If you know anything, the NYPD wants your help,” De Blasio said in a statement. “Hate is never welcome in NYC and we will punish those responsible — whether they threw punches or incited violence — to the fullest extent of the law.”
Cuomo struck a more pointed tone in his statement and called out the Proud Boys by name.
“Hate cannot and will not be tolerated in New York. Here's a message from a Queens boy to the so-called 'proud boys' – NY has zero tolerance for your bs,” the governor wrote in a tweet.
The Southern Poverty Law Center, a nonprofit legal advocacy organization that monitors extremist activity, classifies the Proud Boys as a hate group due to its alleged use of anti-Muslim and white nationalist rhetoric. The Proud Boys group describes itself as “western chauvinists,” but it denies ties to the racist “alt-right” movement.
Chaos erupted near the Metropolitan Republican Club in New York City at around 8:30 p.m. Friday as demonstrators gathered to protest a speech there by Proud Boys Founder Gavin McInnes.
The club said some protesters threw glass bottles at attendees as they exited the venue.
“Gavin’s talk on Friday night, while at times was politically incorrect and a bit edgy, was certainly not inciting violence,” the Metropolitan Republican Club wrote in a statement, noting that its building had been vandalized ahead of the event.
Three others were already arrested in connection to the incident.
Finbarr Slonim, 20, of Manhattan, and Kai Russo, 20, of Brooklyn, were arrested in the wake of the event on robbery and assault charges, according to police. A third man, 35-year-old Caleb Perkins, of Manhattan, was arrested and charged with robbery, assault and resisting arrest, police said.
Investigators released video from the scene on the Upper West Side of Manhattan, showing the wanted men throwing punches as others cheered “USA” in the background. Officials said they could not confirm whether those arrested were associated with a particular group.
Police said they were wanted for questioning and no charges have been filed.
“We continue to investigate the violent incident on the UES on Friday night, and need information regarding these persons-of-interest,” the NYPD wrote in a tweet Saturday. “No complaints have been filed. If you were the victim of a crime, or have information about the incident, please call 1-800-577-TIPS. @NYPDTips.”