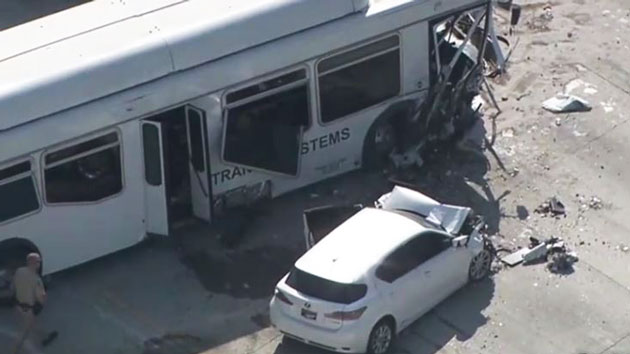 ABC News(LOS ANGELES) — More than two dozen people were injured on Sunday after a bus crossed a freeway divider and plowed into a passenger car on the 405 in Los Angeles.
The accident happened at about 1 p.m. local time and sent 25 people to the hospital, according to the Los Angeles Fire Department. Authorities said five adults, aged 30 to 88 years old, were in serious condition.
The other 20 people suffered only minor injuries.
It was not clear whether the injured people were all on the bus or in the car.
The bus was carrying 37 passengers back from a church event at the Forum in Inglewood, according to Los Angeles ABC station KABC.
Debris was strewn all over the 405 Freeway from the accident.
"Incidents on a freeway are extremely dangerous to not only those involved but to first responders and bystanders," the Los Angeles Fire Department said in a statement. "Upon arrival, firefighters found debris strewn across both sides of the freeway, causing an immediate full closure."
Forty patients in total were evaluated at the scene, but only 25 were sent to the hospital.