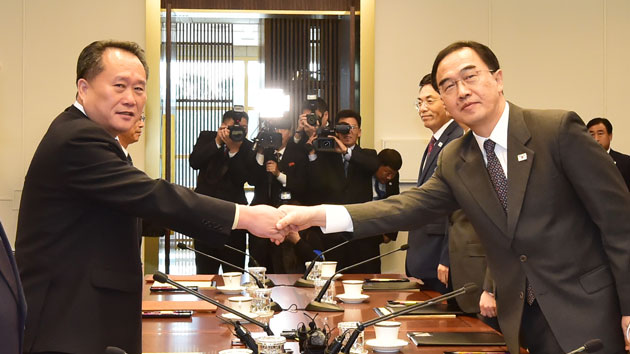 Korea Pool/Getty Images(PANMUNJOM, North Korea) — North and South Korea have agreed to rebuild connections between railways and roads that were severed during the Korean War more than 60 years ago.

Delegations from the two Koreas set out a plan for the transportation connections at a meeting Monday aimed at carrying out a broad agreement last month between South Korean President Moon Jae-in and North Korean leader Kim Jong Un.
“South and North had a sincere discussion and agreed on action plans to carry out the September Pyongyang joint declaration and to develop inter-Korean relations to a higher level,” South Korea’s unification minister Cho Myoung-gyon and North Korean counterpart Ri Son-gwon announced together after the meeting at the Peace House in the border village of Panmunjom.
Representatives from the two sides said joint inspections of railways will start this month and a groundbreaking ceremony for the transportation project will be held between the end of November and the beginning of December.
Officials from the two countries also made appointments to discuss other planned projects, including online reunions for families separated on either side of the North-South border, joint sport events, performances by the North’s art troupes, and support for North Korea's forestry.
Copyright © 2018, ABC Radio. All rights reserved.