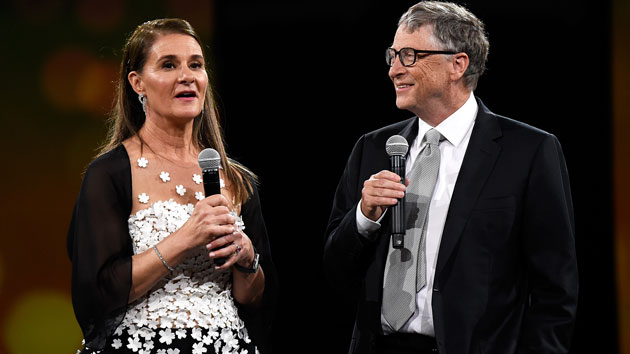 Kevin Mazur/Getty Images for Robin Hood(NEW YORK) — When Melinda Gates was in high school she received a gift from her father that would change her life: an Apple III computer. The Dallas native spent hours learning to code on her Apple III as a teen and it further solidified her love of math and science opening up the vast possibilities of technology.
Gates would go on to be a high achiever in high school, graduating as valedictorian, voted best student and most likely to succeed before heading off to Duke University where her love of the computer would manifest itself in her studies.
It appeared that the sky was the limit for a young Melinda Gates, then Melinda French, but it wasn’t always that way. In her first year of high school Gates says that her grades “weren’t as good as they should be” if she was planning on attending a top university for college, something she says was always a dream of hers. That’s when she received the worst, albeit eye-opening, advice that she never took.
“A college guidance counselor in high school … said to me that I should look at schools closer to home for university instead of going away,” Gates tells ABC News’ Chief Business, Technology and Economics correspondent Rebecca Jarvis.
To Gates, that advice was limiting as she always wanted the option to go anywhere.
“I think she was trying to give me what she thought was realistic advice, you know, she looked at my grades first quarter freshman year and second quarter and they weren’t as good as they should be if I was really aspiring to go to one of those great universities.”
Gates says that advice was the wakeup call that she needed to work harder.
“I took that advice and it fueled me to say I need to get better grades, I need to show that I can do this work because I really want to go to any university … but that's not ever good advice to give a kid. You should always give someone the advice to shoot for their dreams and to help them see the path that could get them there.”
Today she has made it her mission to help people around the world see their own potential as the co-chair of the Bill and Melinda Gates Foundation. Through the Foundation she and her husband work to fix critical problems around the world with a main focus on education in the United States.
“In the U.S. we think the thing that gives people equality is a great education and so we've been very dedicated to trying to fix the U.S. public education system.”

Hear more from Melinda Gates on episode #106 of the “No Limits with Rebecca Jarvis” podcast.