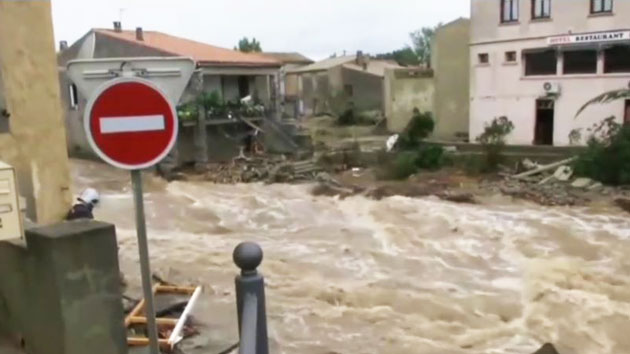 ABCNews.com(PARIS) — At least 10 people have died, one person is missing and five are seriously hurt after heavy rains led to torrential flooding in the southwest of France last night, a spokesperson for the French Interior Ministry told ABC News. On Monday, the spokesperson said the death toll was 13 but the number has since been revised to 10. The spokesperson did not specify why the death toll has decreased since Monday morning.
Three months' worth of rain fell in just a few hours overnight in a region called the Aude department, according to the ministry.
The floods are the worst the region has seen in more than one hundred years, weather monitoring service Vigicrues said.
Pictures taken this morning show a massive amount of destruction, including flooded roads, collapsed homes and overturned cars.
French Prime Minister Edouard Philippe described the emergency crews on scene via Twitter.
"350 firefighters are on the scene. 350 more firefighters are on their way. 7 helicopters have been mobilized. I am keeping myself informed of the situation hour by hour."
Philippe said he will travel to the area this afternoon.
Local authorities said in a statement that more than 1,000 people in a village called Pezens were evacuated this morning because of risks posed by a dam located a few miles away.
In addition, schools in the area remain closed and local authorities are urging people to stay home.
As of Monday morning, 8,000 homes in the region remained without electricity, according to supplier Enerdis.