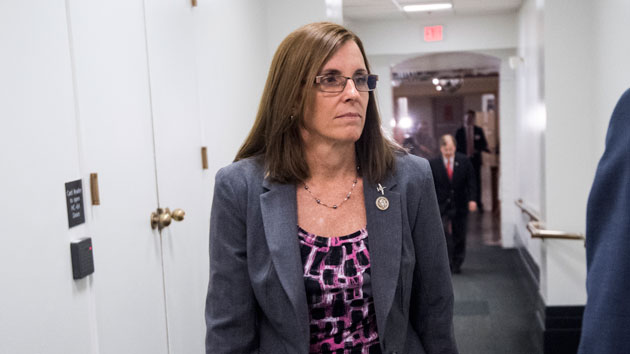 Bill Clark/CQ Roll Call/Getty Images(PHOENIX) — A colorful primary, a negative ad blitz, national attention and early voting have all been a part of the Arizona Senate race.
But up until now, there’s been one missing piece: a debate.
The two candidates who are vying to win the open Senate seat, Democrat Kyrsten Sinema and Republican Martha McSally, are finally set to square off Monday night in Phoenix in the only confirmed debate between the two in this race.
Squabbling between the parties over the number of debates — Sinema asked for two and McSally’s team agreed to just one — and the congressional calendar that kept the candidates, who are both current members of Congress, in Washington led to the debate being set for Oct. 15, just 22 days before Election Day and five days after early voting started in the state.
Airworthy polling in the race has been limited, but most put the result either within the margin of error or have Sinema with a slight lead, which appears to be shocking McSally.
“The fact that she’s even in the running is just like ridiculous honestly at this point,” McSally said to supporters gathered ahead of a door-knocking event Saturday in Phoenix.
The comment comes after a string of old quotes by Sinema were shared publicly throughout the week, including one where she appears to call Arizonans “crazy,” and another where she likened the Copper State to a “meth lab of democracy.” She and her team have written the quotes off as being taken out of context and the latest instances of McSally and Republicans looking to focus on negative smears rather than the issues.
For Republicans, it’s key to hold on to the seat that is currently held by Republican Sen. Jeff Flake, who decided not to run for re-election.
George Bingham is a Republican from Arizona who was handing out McSally posters at a rally held for her with Mitt Romney in Gilbert on Friday. Bingham said that he sees this as a “huge, huge election” that has implications that extend far beyond Arizona.
“We have a president that needs all the Republican support that he can get in the Senate,” Bingham said.
“If he wants to get his agenda done, he’s going to need every Republican senator,” he said.
Another Arizona Republican, Scott Weinberg, said that he saw the recent hearings for Supreme Court Justice Brett Kavanaugh, where Flake played a telling role in approving the judge’s recommendation from the Senate Judiciary Committee, as a clear example of why Republicans need to hold on to the seat.
“I think it’s super important given what we just saw with the Kavanaugh confirmation. Things have gotten so cut-throat in D.C. It’s risen to a new level I think that’s just one more vote that we’re going to have to hopefully we can maintain the majority in the Senate,” Weinberg told ABC News at a "Get Out The Vote" event in Phoenix Saturday.
Democrats, however, see the possible flip of the seat from red to blue as a way to thwart Trump and slow down or stop the implementation of his agenda.
Pam Potter, a college professor who was knocking on doors in Peoria on behalf of Democratic candidates, including Sinema, said she thinks this Senate race is one of the “really important” ones this cycle.
“Right now, we have a president unchecked. Right now they [Republicans] have all the houses,” Potter said.
“Kyrsten specifically is a moderate Democrat. She is ready to work on the issues rather than a partisan stance,” she added.
“In many respects, she is the best replacement for John McCain in that she is willing to put the good of the people ahead of ideology,” she said of the longtime Arizona Republican who passed away in August.
Rina Parisi was a registered Republican for her “entire life” before switching after the 2016 election. She said that she is supporting Sinema in this "vital" Senate race because she feels she fits what she sees as the evolving nature of Arizona.
“The demographics here are changing and I don’t think we have the representation of what the demographics are today,” said Parisi, who knows Sinema personally having had the congresswoman as an instructor at Arizona State University. “We’re no longer the Wild West. We have people from all over the country. It’s not just ranchers who only see each other when they go into town for groceries. We need someone who can represent a population that is diverse and I think Kyrsten is the embodiment of diversity.
“The thing that impressed me about her: how well she listens. She cares, and she does the extra footwork for individuals,” Parisi said while attending an Arizona Democratic Party volunteer event.
Given the close nature of the race and the Senate headcount, it’s no surprise that it is attracting national attention. It’s sure to be thrust into the spotlight later in the week as well, as the Trump campaign announced this weekend that the president will be coming to Mesa for a rally on Oct. 19 as part of a “western swing.”