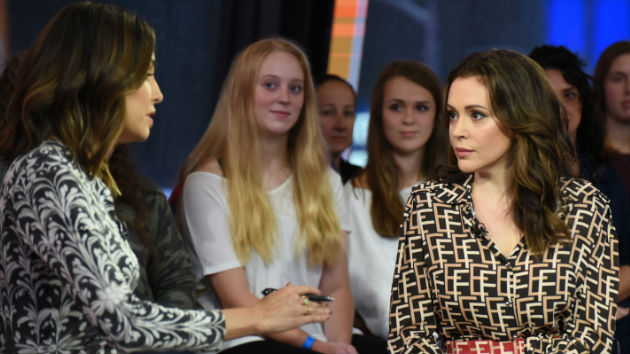 ABC/Paula Lobo(NEW YORK) — Actress and activist Alyssa Milano, one of the first users of the #MeToo hashtag when the movement launched one year ago Monday, called President Donald Trump's recent comments that it is "a very scary time for young men in America" a fear tactic.

Referring to critics of #MeToo who say the movement encourages unproven sexual misconduct allegations against men, Milano told Good Morning America on Monday, "I don't know why their concern isn't that boys can also be hurt, molested and sexually assaulted."
Milano, who has a daughter and a son, added, "I'm of course concerned for boys, but I'm not concerned for them in the way the president is concerned for men."
She said comments like Trump's are "fear tactics" in response to "white men" being in danger of losing some of their power in society.

Milano also acknowledged, "Women have had it hard for generations and there are going to be false claims," but says there must be a process in place to make sure everyone gets a "fair shot."
The former Who's the Boss star, 45, tweeted exactly one year ago Monday, "If you’ve been sexually harassed or assaulted write ‘me too’ as a reply to this tweet." Within hours, the movement caught fire, racking up more than a million #MeToo tweets in less than a day.
Saying she never expected that her simple tweet would result in millions of powerful stories, Milano said, "I think we've come a long way … But, I think we still have a long way to go."
Milano's early adoption of #MeToo — a hashtag first created by Tarana Burke over a decade ago — came right after the first sexual assault allegations involving disgraced movie mogul Harvey Weinstein were revealed in The New Yorker and The New York Times.