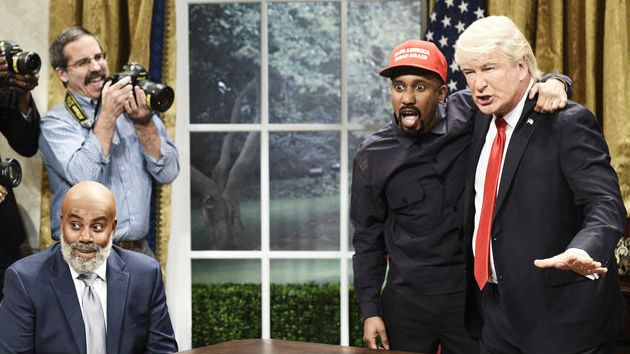 NBC/Will Heath(NEW YORK) — Alec Baldwin made his return to Saturday Night Live this week as the show tackled the insanity that was the Kanye West-Donald Trump meeting in the Oval Office.

The sketch opened with a CSPAN graphic saying the discussion included topics such as "alternate universes," "Superman" and "flying cars."

"Yeah that's right, I flew here using the power of this hat," he said.

"I've got an amazing lunch to get to, but first I'm sure that Kanye wants to make one or two brief, lucid remarks," Baldwin said.

"Time is a myth!" Kanye shouted.

Through voiceovers, it didn't take long for Baldwin's Trump to realize that Kanye was him: "Oh my God, he's black me."

"I played football with a leather helmet and my brain is still working better than his," the faux Brown said.

But Baldwin's Trump still felt like he came out of the meeting on top.

"Remember the lesson from today, black people love me — way more than they love Alec Baldwin," said the faux president, referring to a comment Baldwin made in a interview with The Hollywood Reporter published last Thursday, in which he said, "ever since I played Trump, black people love me."