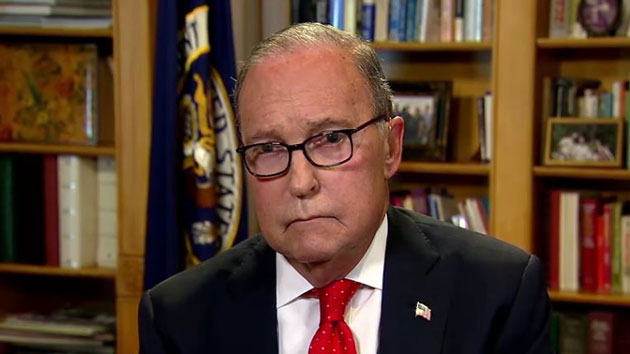 ABC News(WASHINGTON) — A top economic adviser to President Trump responded to a recent U.N. report warning of a possible climate crisis within a little over two decades, saying, "I think they overestimate."
Larry Kudlow, director of the White House National Economic Council, responded to a question from ABC News Chief Anchor George Stephanopoulos on This Week Sunday about a United Nations report on Oct. 7 saying that the world needs to take drastic action against global warming to prevent potentially irreversible consequences by 2040.
“We're always studying these things,” Kudlow said. “The issue here though is magnitudes and timing. Personally, I think the U.N. study is … way, way too difficult. I won't say it's a scare tactic but I think they overestimate.”
Kudlow said he wasn’t “denying any climate change issues,” but questioned the accuracy of report’s findings.
“George, I'm just saying, do we know precisely? And I mean, [is it] worth modeling things like how much of it is manmade, how much of it is solar, how much of it is oceanic, how much of it is rain forest and other issues?” Kudlow said. “I think we're still exploring all of that.”
“I don't think we should panic,” he added. “I don't think there's a, you know, imminent catastrophe coming, but I think we should look at this in a level-headed and analytical way.”
The report by researchers on the Intergovernmental Panel on Climate Change found that if the world doesn’t act to significantly reduce carbon emissions in the atmosphere, potentially irreversible damage from climate change could occur much sooner than anticipated.
Trump responded to the report Tuesday, saying it “was given to” him, but he needed “to look at who drew it.”
“I want to look at who drew it. You know, which group drew it. Because I can give you reports that are fabulous, and I can give you reports that aren’t so good. But I will be looking at it. Absolutely,” the president said.