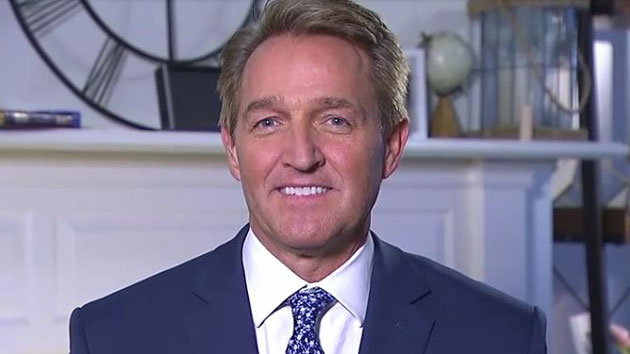 ABC News(WASHINGTON) — A leading Republican critic of President Donald Trump slammed the suggestion that the U.S. could resume separating migrant and refugee families at the U.S. border, saying the policy is 'simply … un-American.'
Sen. Jeff Flake, R-Ariz., responded to a question from ABC News Chief Anchor George Stephanopoulos on This Week Sunday about a report that the White House is weighing a new effort to separate families at the border in hopes of reducing the number of people trying to enter the country illegally.
The president on Saturday commented on the proposal, which was first reported by The Washington Post.
"If they feel there will be separation, they won't come," Trump said.
Stephanopoulos asked Flake about Trump's talking about bringing back family separations in some form just as a new ABC News/Washington Post poll shows Democrats have a huge edge on immigration over Republicans.
"Is the president making a mistake here?" Stephanopoulos said.
Flake responded, "Yes, he is. We shouldn’t bring that policy back. That, that simply is un-American, and I think everybody recognized that. The president seemed to. Certainly the first lady and others spoke directly against it."
In an exclusive interview with ABC's Tom Llamas last week, first lady Melania Trump said the administration's earlier family separation policy was "unacceptable."
"It was unacceptable for me to see children and parents separated," the first lady said. "It was heartbreaking. And I reacted with my own voice."