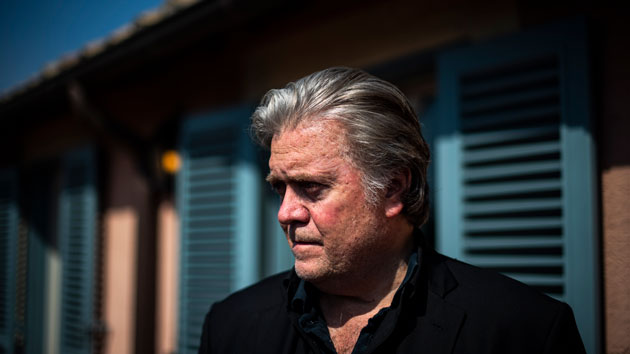 Jabin Botsford/The Washington Post via Getty Images(WASHINGTON) — Former White House chief strategist Steve Bannon's political arm is spending $3 million on digital ads targeted at getting out the vote ahead of the midterms, according to Bannon.
The new push, just three weeks before the midterms, is funded by Bannon's new outside political group, a 501(c) 4, called "Citizens of the American Republic" that he formed in August.
Groups under 501 (c) 4 are social welfare organizations that must not be organized for profit and "must be operated exclusively to promote social welfare," according to the IRS.
Bannon will be out on the campaign trail stumping for Republican candidates who are considered vulnerable with the message that even though President Donald Trump isn't on the ballot, the midterm election is a referendum on his presidency.
He'll be traveling to 10 states including Virginia, New York, Pennsylvania, Kansas, Michigan, Arizona, Iowa, Minnesota, Texas and Florida, with a message that the president is at war with the Democrats, and that the Supreme Court nomination hearings for Justice Brett Kavanaugh was a preview to impeachment hearings that the Democrats will try to hold against Trump.
"Trump has delivered the goods, now it's time for the deplorables to deliver the votes," Steve Bannon told ABC News on Sunday.
Bannon wrote and directed a documentary called "Trump at War," with the goal of galvanizing the political base. Bannon said he'll air the film on Tuesday, in the Dallas congressional district where Republican Congressman Pete Sessions is attempting to hold onto his seat.
Donald Trump Jr. is hosting a fundraiser for Sessions on Thursday, and Vice President Mike Pence held a rally for Sessions in Dallas last week.
"Our focus on explaining that a vote for any House Republican is a vote to stop the Democrats from impeaching the president completely broke through during the Kavanaugh hearings," Bannon's political strategist Sam Nunberg told ABC News. "If the president continues to communicate that the 'Democrat Pelosi Mob' will impeach him if they are in power, we are highly confident we can hold them at the gates and keep the House in Republican hands. A red wave is rising."
According to Nunberg, he and Bannon are running a daily war room until Election Day, which they are referring to as "Judgment Day."
Despite Bannon's push to keep Trump in power, the relationship between Trump and his former chief strategist deteriorated in January 2018 when Bannon reportedly called the infamous Trump Tower meeting between Jared Kushner and Donald Trump Jr. and Russians, "treasonous."
He was forced to step down from the board at conservative website Breitbart, and Rebekah Mercer, a wealthy billionaire who has supported Bannon's political activity in the past, also cut ties with him at the time. She has not supported Bannon's political efforts since.
On election night, Bannon said he will be blocks away from the White House, holding a Facebook Live town hall.
Copyright © 2018, ABC Radio. All rights reserved.