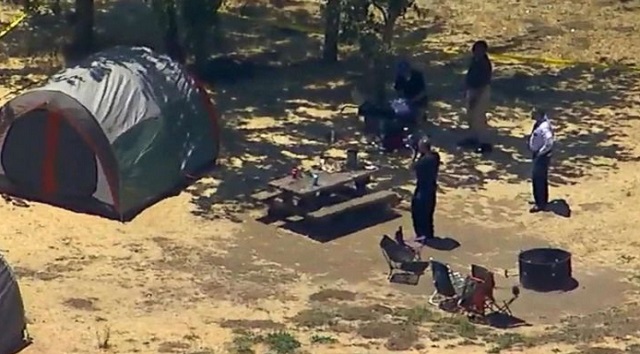 ABC News(MALIBU, Calif.) — A man has been arrested in connection with a string of burglaries around Malibu and Calabasas in California.
Anthony Rauda, 42, is being held without bail on an active parole violation after officials said they found him armed with a rifle in a steep ravine, matching the description of the suspect in a rash of recent burglaries.
The Los Angeles Sheriff's Department said yesterday they are working on linking Rauda to five burglaries committed since July, as well as possibly linking him to three similar unsolved burglaries from the past two years. Sheriff Jim McDonnell said each of the burglaries included stolen food items and happened between 2:00 a.m. and 5:00 a.m.
Officials released a photo of Rauda being taken into custody, but blurred his face in an effort to "preserve the integrity of the investigation," saying they may ask witnesses to identify him in the future.
A massive search for the suspect began last week after an office in the Santa Monica mountains was burglarized and a witness reported seeing a man with a gun, according to ABC affiliate KABC-TV.
“The plan included a coordinated, comprehensive search of a vast area located in the heart of Malibu canyon,” Sheriff McDonnell said.
After hours of investigation, deputies say they had a stand off with the suspect until he decided to surrender, and was then taken into custody without incident.
Aside from the burglaries, investigators also want to know if Rauda was involved in the murder of Tristan Beaudette who was shot while camping with his two young daughters in Malibu Creek State Park in June.
Sheriff McDonnell cautioned that police cannot say for sure if Rauda is linked to the murder, saying that it's very early in the investigation, and that there is more work to be done. “We’ve got a weapon in custody, ballistics tests will be performed on that among many other scientific tests to be able to tie the individual to crimes or to eliminate him from other crimes," McDonnell said.
The Sheriff's department said Rauda has a history of weapon violations and burglaries. He added that people in Malibu and Calabasas should remain vigilant, and report any suspicious activity.
Copyright © 2018, ABC Radio. All rights reserved.