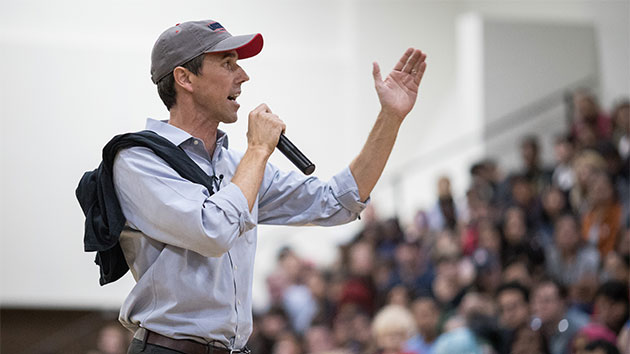 Loren Elliott/Getty Images(DALLAS) — Rep. Beto O'Rourke, the upstart Democratic challenger to Texas GOP Sen. Ted Cruz, announced Friday that his campaign raised $38.1 million in the third quarter of 2018, shattering the previous record for a U.S. Senate candidate by more than $15 million and adding fuel to Democratic hopes that the reliably red state remains in play in November.

"The people of Texas in all 254 counties are proving that when we reject PACs and come together not as Republicans or Democrats but as Texans and Americans, there’s no stopping us," O'Rourke said in a statement released by his campaign Friday. "This is a historic campaign of people: all people, all the time, everywhere, every single day — that’s how we’re going to win this election and do something incredible for Texas and our country at this critical moment."

The record haul nearly tripled O'Rourke's fundraising for the entire cycle, and easily surpassed the previous record set by former New York Republican Rep. Rick Lazio in his 2000 U.S. Senate bid against Hillary Clinton. The number also bested the fundraising totals posted by then Sen. Barack Obama's 2008 presidential campaign, which raised $25.5 million in the lead up to the Iowa caucuses and New Hampshire primaries, and is more than former Florida Gov. Jeb Bush raised during his entire 2016 presidential campaign.

A crush of national media attention and O'Rourke's savvy use of social media have vaulted him into celebrity-like status in the 2018 political landscape. A clip of O'Rourke defending NFL players who knelt in protest during the national anthem shared in August went viral and has been retweeted more than 200,000 times.

Sen. Cruz's campaign announced earlier this month that he raised just over $12 million during the same time period — from July through the end of September. Like a number of Democratic candidates this cycle, O'Rourke has spurned donations from corporate PACs, and was quick to point out that the numbers were "powered by 802,836 individual contributions."

But despite the staggering numbers, O'Rourke's task of unseating Cruz in a state that has not elected a Democrat statewide since 1994 remains steep. A recent poll from Quinnipiac University had Sen. Cruz leading O'Rourke by 9 points, and FiveThirtyEight's 2018 Senate forecast gives the three-term Congressman a two in nine chance to win the seat.

Cruz has remained confident in the face of the aggressive challenge from O'Rourke, attempting to paint him as too liberal for the state's conservative-leaning electorate that voted for Donald Trump by 11 points in the 2016 presidential election.

"We have a real race in the state of Texas, the hard left is energized, they are angry, many of them are filled with hatred for President Trump," Cruz said at a debate in Dallas last month.

Outside groups backing the Republican incumbent have spent over $5 million thus far this cycle in support of Cruz or in opposition to O'Rourke, according to ProPublica.