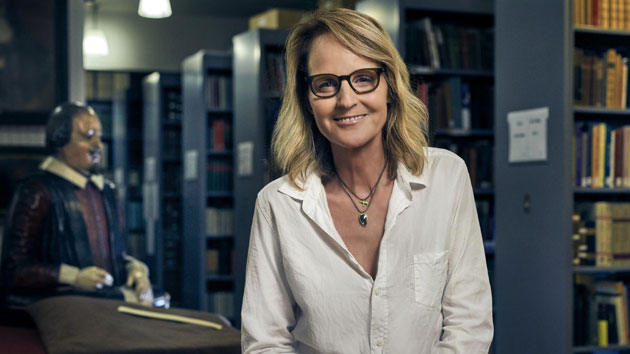 Courtesy of Blakeway Productions
Posted on October 12, 2018 by ABC News

Courtesy of Blakeway Productions(NEW YORK) — Helen Hunt is ready to share her love of William Shakespeare as host of the third season premiere of PBS’ Shakespeare Uncovered.

In the episode airing Friday, the actress does a deep dive into the play Much Ado About Nothing. She’s starred in the play twice in her career, in the role of Beatrice.

“One thing about Shakespeare is I never leave with a fist pump, like, ‘Nailed it!’” Hunt tells ABC Radio. “You just humbly try to find your way with the language, let the language move you in ways that other wonderful writing just doesn't.”

Hunt was particularly drawn to Much Ado because of her love of romantic comedies. She says we can see Shakespeare’s influence even in Paul and Jamie Buchman, the characters she and Paul Reiser played in the hit ‘90s sitcom Mad About You.

Shakespeare Uncovered not only dissects the meaning and cultural relevance of Shakespeare’s plays, it also reveals the history behind them.

“When people first approach Shakespeare they think it's fancy or impenetrable, or 'I'll never understand it' or 'it's gonna be boring' — the biggest fear is that it's boring,” Hunt says. “And once you just have a tiny window, which I think this show offers you, into the history of the plays and the relevance of the plays and the humor and heartbreak in the plays, you have a whole lot of beauty ahead of you.”