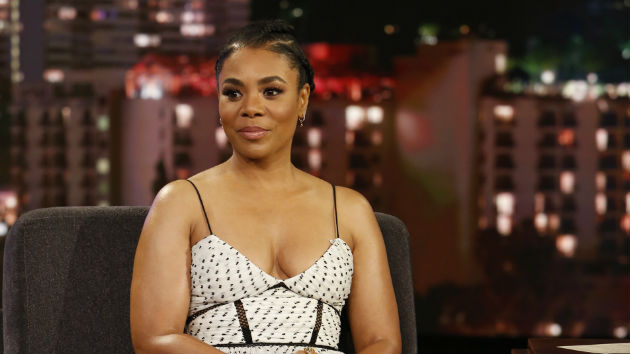 ABC/Randy Holmes(NEW YORK) — Ahead of the national release of The Hate U Give, Regina Hall is sharing her admiration for the film's cast and director.

The film, which is an adaptation of Angela Thomas' novel of the same name, follows the story of Starr, a sixteen-year-old girl who must decide if she'll stand up for what she believes after witnessing the shooting of her best friend by a police officer. In the drama, Hall plays Lisa Carter, Starr's loving, but extremely protective mother.

Hall tells ABC Radio that Thomas' book was already "amazing" to begin with, but when the cast — specifically Amandla Stenberg, who plays Starr, and Russell Hornsby, who plays Starr's father — took on the characters, she became an instant fan.

"Amandla is phenomenal in the movie and it's like I'm singing praises — but Russell — he really is. They really are," she says. "Everybody really felt like the people that I've read in the book. That I read on the page."

Hall also applauded the film's director George Tillman for his "phenomenal job of telling a story, as opposed to… blaming."

Yet Hall is quick to note that in addition to the film's talented actors and director who help bring the story to life, the film also offers "hope" in a dark and uncertain world.

"I loved every character in it," she continues. "And I just loved the unfolding of what happens and it's not like picture perfect. But there is hope. You know what I mean, there's resonance of hope and that is incredible. So I just feel really honored to be able to be a part of it and to support."

The Hate U Give hits theaters nationwide on October 19.

We can’t give up wearing masks as COVID cases fall: Ohio governor
Eddie Murphy, Arsenio Hall, and cast share their ideas for a third installment of ‘Coming to America’
Food industry professionals raise $50,000 on Clubhouse to ‘Stop Asian Hate’ and support restaurants
After he was called slur on the court, Jeremy Lin highlights surge in anti-Asian hate
LA business owners fighting to survive in pandemic feel mix of hope and frustration
Rise in anti-Asian American hate crimes may lead to mental health crisis