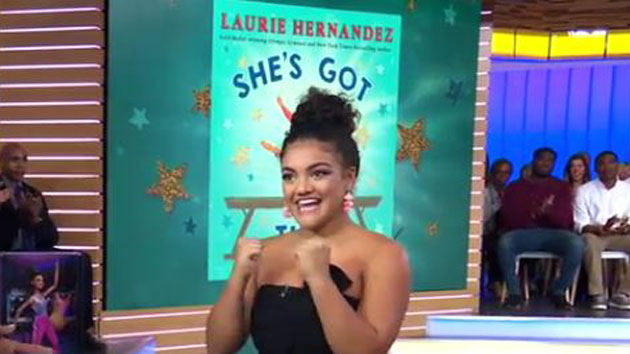 ABC News(NEW YORK) — Two-time Olympic medalist Laurie Hernandez is returning to gymnastics.
The 18-year-old made the announcement on "Good Morning America" Thursday, saying she is "currently training."
"Crossing your fingers for 2020," Hernandez said of the future Olympics, which will be held in Tokyo.
Besides winning a gold and silver medal, Hernandez has a new children's book out titled, "She's Got This." The name of the book is inspired by the gymnast visibly reciting "I got this" to herself before each event at the U.S. women's gymnastics team at the 2016 Summer Olympics.
"Whenever I'm competing, I'm pretty much terrified before I go up there," Hernandez said. "And so, it's making sure that I can calm myself down before I hop onto the equipment. And for me, that's a lot of self-talk and self-preparation and it's being my own hype man."
"She's Got This" is about a gymnast who experiences setbacks, but keeps going.
This is the second published book for Hernandez, who also won Season 23 of "Dancing With the Stars."
But that's not all: Hernandez also has her own Barbie doll.
"She has my curls, which is really important to me," Hernandez said. "When I was little, I always wanted to straighten my hair because I saw everybody had that but now I get to embrace that."
On "GMA," Hernandez also showed adorable young fans in the audience how to appropriately stick a landing.
"She's Got This" is available now.

A year of COVID-19: What was going on in the US in March 2020
Teyonah Parris talks ‘WandaVision’ Easter eggs and why she feels “no pressure at all” in the MCU
NSC: Motor vehicle deaths up in 2020, despite fewer people on roads amid pandemic
Biden announces Merck will help produce Johnson & Johnson COVID-19 vaccine
CBS announces the 73rd Annual Emmy Awards will air live on September 19
‘Wonder Woman’ star Gal Gadot announces pregnancy with baby number three