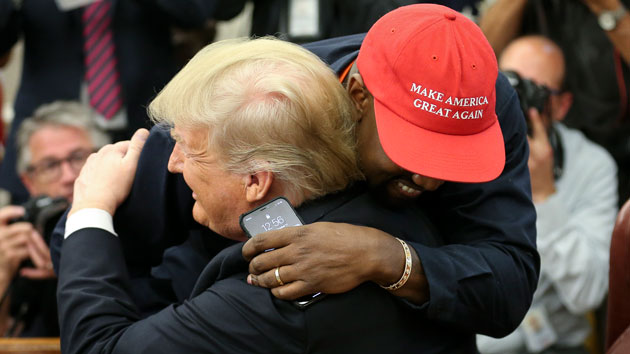 Oliver Contreras – Pool/Getty Images(WASHINGTON) — In an extended soliloquy that touched on racism, tax breaks, prison reform, mental health and the need for art programs in schools, Kanye West, the at times controversial rapper-turned-prison reform activist, used his meeting with President Donald Trump at the White House on Thursday to offer a platform on issues he feels are most important to the African American community.
“You are tasting a fine wine,” he told reporters as he knelt in front of Trump's desk. “It has complex notes to it.”
Those complex notes included riffs on West's potential political career.
Trump said the rapper “could very well be” a future presidential candidate.
“Only after, 2024,” West responded.
“Let’s stop worrying about the future all we have is today," West said. "Trump is on his hero’s journey right now. He might not have thought he’d have a crazy m***** f***** like (me).”
There were catchy refrains such as his rejoinder on Trump and the jibes he receives from comedians: "If he don’t look good, we don’t look good. This is our president."
There were notes of reflection when he said of his previous comments about former President George W. Bush not caring about African Americans, "I was caught up in a victim mentality."
And then there were the fast-paced breaks. According to West:
He is in the 98th percentile on his IQ test.
He's not bipolar, he really suffered from sleep deprivation.
Our nation's factories and farmers should be empowered.
Automaker Ford should design the "dopest" cars, the "fliest most amazing cars."
“I tell you what that was pretty impressive,” Trump said after Kanye's delivery was done. “That was quite something.”
“It was from the soul," West said. "I just channeled it.”
The president and rapper discussed prison reform, the African American unemployment rate and the surge in violence in West's hometown of Chicago, according to a statement from White House press secretary Sarah Sanders. West also brought Jim Brown, a former star running back for the Cleveland Browns and someone who has previously spoken with Trump about issues impacting the black community.
In an interview on Fox and Friends on Thursday, Trump spoke glowingly about the rapper calling him "a friend of mine." On Tuesday, Trump called West " a terrific guy" and someone who "loves what we're doing for African-American jobs."
West's wife, Kim Kardashian West, has visited the White House twice this year – most recently in Septemeber – to discuss prison reform with the president as well as with Ivanka Trump and Jared Kushner.
In May, Kardashian West met with President Trump in the Oval Office to talk about prison reform and clemency for Alice Marie Johnson. The 63-year old grandmother was serving a life sentence on drug charges. Shortly after Kardashian West’s meeting with the president about Johnson, the president commuted the grandmother’s sentence.
While the couple's increased public advocacy for prison reform has drawn lauds in some circles, Kanye West's relationship with Trump has been a source of criticism in the hip-hop community.
West declared earlier this year that the "mob" can't make him abandon President Trump. Following months of criticism from hip-hop fans, recording artists and friends alike over his support for the president, the rapper remains undeterred.
During a recent appearance on "Saturday Night Live", West wore a “Make America Great Again” hat and dove into a passionate, pro-Trump rant on live TV – one that continued even after the show ended.
The following Sunday afternoon, amid backlash over his "SNL" appearance, the rapper tweeted a photo of himself wearing a red hat with the MAGA campaign slogan, writing that "this represents good and America becoming whole again. We will no longer outsource to other countries. We build factories here in America and create jobs. We will provide jobs for all who are free from prisons as we abolish the 13th amendment. Message sent with love."
The thirteenth amendment abolished slavery in the U.S., "except as a punishment for crime whereof the party shall have been duly convicted."
West later tweeted that "the 13th Amendment is slavery in disguise meaning it never ended We are the solution that heals." In another tweet he added "not abolish but. let's amend the 13th amendment We apply everyone's opinions to our platform."
Trump, who has repeatedly touted West’s support, gave him a reciprocal shoutout on Sunday morning.
“Like many, I don’t watch Saturday Night Live (even though I past hosted it) – no longer funny, no talent or charm. It is just a political ad for the Dems. Word is that Kanye West, who put on a MAGA hat after the show (despite being told “no”), was great. He’s leading the charge!” the president tweeted.
On Thursday, West declared that his "Make America Great Again" hat gives him "power".

"It was something about when I put this hat on, it made me feel like Superman. That's my favorite superhero," West said. "You make a superhero cape as a guy who looks up to you and looks up to American industry guys. Nonpolitical, no b*******. However you want to do it.

Awkward moment as House Republican leaders clash over Trump speaking at CPAC
Democratic leader says AG may look at Trump in Capitol riot probe
Don’t ask Tom Holland if Andrew Garfield and Tobey Maguire will cameo in ‘Spider-Man 3’
Stormy weather pattern on the way for the West and the South
Spring-like weather across much of US, possible heavy snow in Rockies and parts of West
Biden still sees ‘good shot’ at confirming Neera Tanden for OMB despite bipartisan opposition