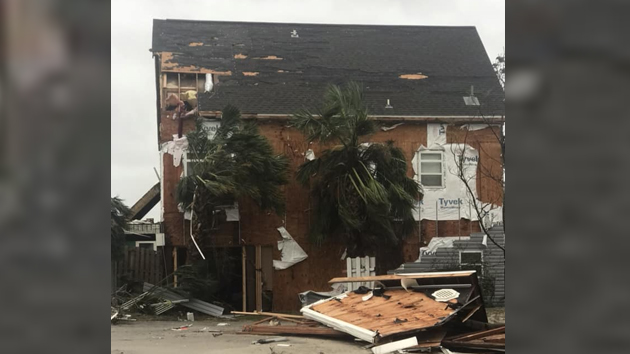 Brenda Griffies (MEXICO BEACH, Fla.) — Hurricane Michael left a trail of destruction in its wake after making landfall on the Florida Panhandle Wednesday.
The power of the fierce Category 4 storm is evident in dramatic footage showing demolished homes and submerged neighborhoods.
ABC News meteorologist Ginger Zee saw a devastating storm surge in Mexico Beach, Florida, topple a house from its foundation.
Zee was in the eye wall of the storm for more than an hour, with conditions were so bad that she and her team lost the ability to broadcast.
"All I can see is devastation," Zee said on ABC News' live broadcast.
On Thursday, Zee posted this photo of the aftermath in Mexico Beach, writing, "Finally have service and will try to tweet the photos I am able to as I know many of you are desperate to know what’s left. Survivors gave me numbers to call and I have. Powerful phone calls telling their loved ones they are alive."
Video from Apalachicola, Florida, shows dozens of abandoned vehicles submerged in water and other destruction left in the wake of the storm.
The winds were so strong they tore down a canopy over a Texaco gas pumping station in Inlet Beach.
In Panama City, a massive metal pole holding up a billboard toppled over, crushing a building below it.
The winds were strong enough to pierce the windshield of a car in Panama City Beach.
One building, seen in a photo posted by ABC affiliate WBMA-TV from Tuscaloosa, appears to have crumbled beneath the hurricane's 150 mph winds.
Northwest Florida Daily News reporter Annie Blanks tweeted video footage of seawater flowing inside the Dewey Destin's seafood restaurant near Mexico Beach.
The Lanark Fire Department tweeted video of a terrifying storm surge creeping up the shore, bringing seawater into a carport of a beachfront home.
Strong waves overtook a boat ramp to Choctawhatchee Bay at Legion Park, a video posted to Instagram by Lars Rygaard shows.
Richard Fausset, and Atlanta-based reporter for The New York Times, posted a photo of a group of people huddling in a storage closet at his hotel in Panama City.
Fausset wrote that the "whole hotel is shuddering" like an earthquake.
Workers at the Walton County Animal Shelter were seen comforting dogs and cats up for adopting as they ride out the storm.
Michael is the strongest hurricane to strike the Florida Panhandle since the mid-1800s, according to FEMA.
After pummeling Florida, Michael barreled through Georgia. In Paulding County, Georgia, a road was left sliced in two.
The storm is quickly moving north on Thursday, through the Carolinas and beyond.