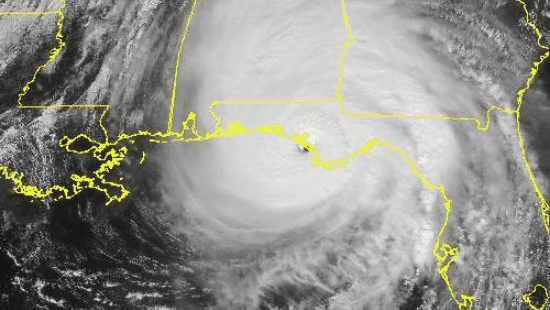 National Hurricane Center(PANAMA CITY, Fla.) — At least two people have died as a result of Hurricane Michael, a ferocious Category 4 hurricane that made landfall Wednesday afternoon with winds peaking at 155 mph.
Michael is the strongest storm since Hurricane Camille in 1969 and the third-most-powerful on record to hit the U.S.
A broad swath of the Southeast is affected, with about 20 million people under either a warning or a watch for hurricane flooding or tornadoes, said ABC News contributor Tom Bossert, former Homeland Security adviser to President Donald Trump.
"Hurricane Michael is the worst storm that the Florida Panhandle has ever seen," Gov. Rick Scott said at a press conference Wednesday evening.
The storm's first reported victim died in a "debris-related" incident in Greensboro, about 30 miles west of Tallahassee, Olivia Smith, public information for the Gadsden County Sheriff's Office, told ABC News.
An 11-year-old girl in Lake Seminole, Georgia, became the storm's second victim. She was killed when part of a metal carport crashed into her family's trailer and struck her in the head, according to Travis Brooks, director of Seminole County's Emergency Management Agency.
"Complete and total devastation," Brooks told ABC News. The entire county is "pitch black." No roads are clear, and it's hard to reach people who may need emergency services.
As of early Thursday, parts of Virginia and North Carolina were expecting as much as 9 inches of rain. Tornadoes in those regions are still possible.
After making landfall, the storm tore through northwest Florida. By 4 p.m., Michael still had extreme winds of 140 mph as it moved toward southwest Georgia. The eye of the storm was moving through southwestern Georgia around 6 p.m.
Early Thursday, Michael, now a tropical storm, was abut 30 miles south-southwest of Macon, Georgia, with winds of about 70 mph. It was proceeding northeast at about 17 mph.
Although the storm system passed quickly through Florida, Scott urged people to continue to shelter due to forecasts predicting life-threatening storm surge and damaging winds would continue.
"The worst thing you can do now is act foolishly or put yourself and your family at danger," Scott added.
More than 550,000 people were without power early Thursday, including almost 300,000 in Florida.
Tropical-storm conditions are forecast to spread across Georgia and the Carolinas overnight into Thursday.
Life-threatening winds, dangerous storm surge
As the winds pushed the ocean water onto the coast of Mexico Beach, Florida, ABC News chief meteorologist Ginger Zee said she saw an "entire home, a well-built home, rolling down the street. … It makes you shake."
Unlike last month's Hurricane Florence, which brought massive flooding to the Carolinas, one of the biggest threats from Michael is the wind.
Michael, which Scott called "monstrous," made landfall with almost the highest possible wind speeds for a Category 4 — 155 mph. When a hurricane reaches 157 mph, it's reclassified a Category 5, the highest.
After Michael barreled through Florida, it struck Georgia as a Category 2 and turned into a Category 1 storm about 60 miles outside of Macon.
As Michael approached the coast, it's pressure dropped — the lower the pressure, the more intense the storm. Michael's pressure levels are comparable to those of Katrina, which devastated the Gulf Coast in 2005.
The hurricane also was forecast to bring storm surges of up to 14 feet.
"Anybody that doesn't evacuate that experiences storm surge doesn't typically live to tell about that," Brock Long, administrator of the Federal Emergency Management Agency, told "Good Morning America" on Wednesday.
Residents seek shelter, hunker down
Thousands fled the Florida coastline before it was struck by heavy rainfall that may reach 12 inches. But by Wednesday morning, it was too late to evacuate. Those who remained were urged to shelter in place.
"This was a shock, waking up knowing it was a [Category] 4," said Panama City Beach resident Julie Gordon. "Thinking it was a [Category] 2 was a very different story."
All bridges from Panama City Beach to further inland have closed, so Gordon said she's riding out Michael at home, "hoping and praying that the storm will continue to drift to the northeast … where it's not quite as populated."
The Panhandle is the wide strip of northwest Florida that touches the Gulf of Mexico and includes Alabama. Popular with tourists for its beaches, the area also has many year-round residents. Its largest city is Pensacola, with a population approaching half a million.
About 4,000 people have entered 70 evacuation shelters, FEMA officials said. Michael may bring weekslong power outages.
Bossert said he's concerned not enough people evacuated and many rescues may be needed after the brunt of the storm passes.
"I am very, very worried" about the recovery, Bossert added. "People are going to be really struggling after this one."
Mobile homes are especially a concern since they aren't built to withstand hurricane-force winds, so in one county in south Georgia, mobile-home residents were invited to shelter at a local church, reported ABC affiliate WALB in Albany, Georgia.
"The size of this thing is growing," said Reggie Rachals, sheriff of Lee County, Georgia. "It will tear up mobile-home parks real bad."
States of emergency

Scott declared a state of emergency in 35 Florida counties. Trump approved an emergency declaration for Florida, permitting the federal government to provide resources and aid.
"This is a small storm in an area that they never thought that it would be, and they said it grew into a monster," Trump said Wednesday from the Oval Office.
"We're very, very prepared," the president said. "We have massive amounts of food and water that gets brought in immediately."
"Some of the areas are very poor," Trump said. "Not easy for a person without the necessary money to leave."
The president added that he will likely visit Florida on Sunday or Monday.
Georgia Gov. Nathan Deal also has declared a state of emergency.
"What you're going to see is a storm moving very rapidly through Georgia, and it will maintain hurricane strength through southwest Georgia and central Georgia as it passes through later today and early tomorrow," FEMA's Long told "GMA" on Wednesday morning.
Alabama, where about 15,000 residents were without power early Thursday, was besieged by high winds and heavy rain. Gov. Kay Ivey issued a state of emergency.
North Carolina and South Carolina likely will see heavy rainfall, which could cause flooding in areas already damaged and rain-soaked by Hurricane Florence last month.
A state of emergency was declared Wednesday in North Carolina, said Gov. Roy Cooper, as he warned that winds will be strong enough to down trees.
The last Category 4 hurricanes to strike the U.S. mainland both were in 2017 — Irma, which slammed into Florida, and Harvey, which hit Texas.