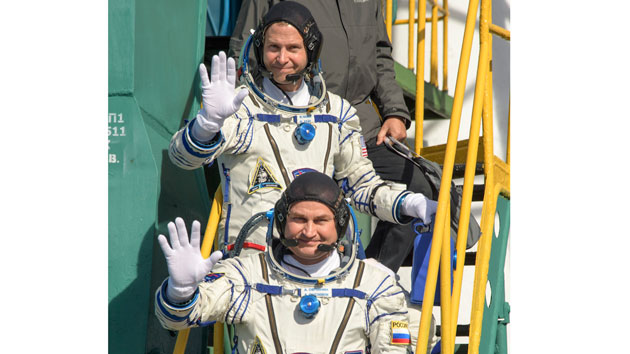 Bill Ingalls/NASA via Getty Images(BAIKONUR, Kazakhstan) — A Russian cosmonaut and an American astronaut are in "good condition" after a booster rocket on their spacecraft failed and forced them to make an emergency landing Thursday.
The Soyuz MS-10 rocket took off at 4:40 a.m. local time on what was supposed to be a six-hour journey to the International Space Station. Instead, the rocket suffered a malfunction shortly after taking off from Russia's spaceport in Baikonur, Kazakhstan.
The spacecraft's two-man crew, NASA astronaut Nick Hague and Russian cosmonaut Aleksey Ovchinin, made an emergency landing in the craft's capsule in Kazakhstan. Rescue teams reached the landing site and confirmed that both men are alive and in "good condition," NASA wrote on Twitter.
"[Nick Hague] and Alexey Ovchinin are on helicopters, making their way back to Baikonur, Kazakhstan. Search & rescue teams report that they remain in good condition after a safe landing following an issue with their launch on a Soyuz earlier," NASA tweeted.
Russian state news agencies reported that the two men would be flown to the town of Zhezkazgan in central Kazakhstan to undergo medical examinations.
The head of Russia’s Roscosmos space agency, Dmitry Rogozin, said that it was creating a state commission to investigate the cause of the crash, and deputy prime minister Yuri Borisov announced that Russia would be suspending manned flights until the incident could be reviewed.
The moment the boost rocket failed was captured on the live-feed of the launch carried on NASA and Roscomos’ websites. In the video, a burst of light was seen around the rocket, which was still visible in the distance.
NASA has paid for places on Russia’s Soyuz rockets for its astronauts to travel to the International Space Station since the American shuttle retired seven years ago.
Recently, the U.S. has been seeking to replace the route with contracts with commercial space companies, such as SpaceX, but the Soyuz currently remains the only way to reach the station.
SpaceX and Boeing are both scheduled to have unmanned test flights with their own spacecraft in January and NASA astronauts are training for flights aboard the two companies' crafts in June and August.
Copyright © 2018, ABC Radio. All rights reserved.