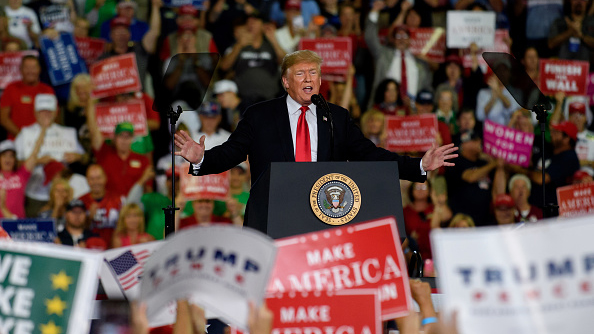 Jeff Swensen/Getty Images(ERIE, Pa.) — As Hurricane Michael barreled into the Gulf Coast, President Trump made his way to the northern corner of Pennsylvania for a Make America Great Again rally and political fundraiser.
“Our thoughts and prayers on behalf of the nation to everyone out there in the path of Hurricane Michael, especially in the Florida Panhandle were it’s hitting, and its hitting hard,” Trump said as the rally began. ”It’s a big one — one of the biggest we’ve ever seen.”
“I’ll be traveling to Florida very, very shortly and I just want to wish them all the best. Godspeed,” Trump said.
He then turned to politics.
Trump was hoping to boost support for Republicans like Rep. Mike Kelly who is running for re-election to Congress, gubernatorial candidate Scott Wagner and Rep. Lou Barletta, who is currently trailing in the race for U.S. Senate against Democrat Bob Casey.
The president reminisced about the 2016 general election in Florida and Pennsylvania, even saying the Keystone State was the one “that got away.” He said he couldn’t use that expression, though “under the rules of #MeToo.”
“Pennsylvania hasn’t been won for many years by Republicans, but every Republican thinks they’re going to win Pennsylvania,” Trump said. “Every Republican, I used the expression, you know there’s an expression but under the rules of #MeToo, I’m not allowed to use that expression any more. I can’t do it. It’s the person that got away.”
Trump narrowly won Pennsylvania in 2016, and took all 20 electoral votes. He went on to falsely say that he won 52 percent of women in 2016. He won 41 percent of all women, and 52 percent of white women.
Just days after swearing in Kavanaugh, Trump slammed Democrats for their treatment of him and his family, calling it a “disgrace.”
“What Democrats did to Kavanaugh and his family is a national disgrace,” Trump said to boos.
“You look at Cory Booker and the way he talked, you look at Sen. Diane Feinstein, the disgraceful behavior, the disgraceful leaking of documents, you look at the false charges, the false accusations it was a disgrace,” Trump said.
As Hurricane Michael picked up intensity and threatened to wreak historic damage across the South, it was uncertain whether the president would be able to attend the rally. Throughout the day, reporters asked the president if he would actually attend. For the third time on Wednesday, the president swatted away questions about whether it was appropriate to hold a rally while part of the country is hammered with historic winds and rain.
“We have thousands of people lined up, so we wanted to make this stop. It would be very unfair [to cancel],” the president told reporters after landing in Pennsylvania.
“You have thousands of people who started coming last night. So we’re going to do that and we have a lot of happy people. In the meantime, we have it very well covered in Florida — from the White House and from here, from what’s on the plane and we’ll be back very shortly. But it would have been very, very unfair to thousands of people.”
At one point during the flight from Washington, a White House deputy press secretary came back to deliver a statement reassuring the press that the president is monitoring the storm, no matter what.
It was a packed house inside the Erie Insurance area, which has a maximum capacity of 6,500.
One supporter, Lynne Rudzinski from Erie, said she was glad the president came for the rally over presiding over storm response. “He has other people that can take care of that,” she said. "Plus, can't Air Force One be anywhere in an hour?"