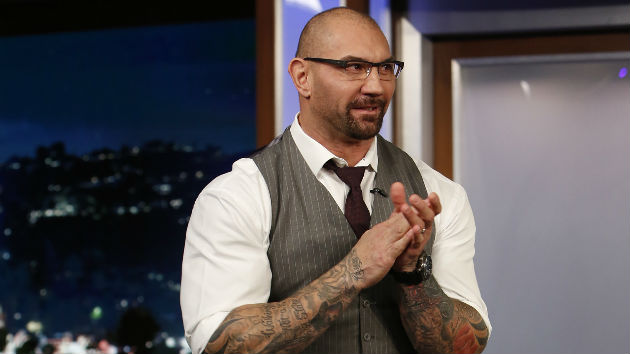 ABC/Randy Holmes(LOS ANGELES) — Guardians of the Galaxy star Dave Bautista wants in on the new Suicide Squad movie if James Gunn is on board.

Sources confirmed to ABC News Tuesday that Gunn — who directed the first two GOTG movies but was let go from the third — is in talks with Warner Bros and DC to write and possibly direct the next Suicide Squad installment. Bautista retweeted a story reporting the news and wrote, “Where do I sign up!”

Bautista, who plays Drax in the Guardians films, has been an outspoken supporter Gunn since Disney fired him from the franchise after old controversial tweets of his surfaced.

“I will have more to say but for right now all I will say is [email protected] is one of the most loving, caring, good-natured people I have ever met," Bautista tweeted in July. "He’s gentle and kind and cares deeply for people and animals. He’s made mistakes. We all have. Im NOT ok with what’s happening to him.”

Bautista later tweeted that he’ll continue with Guardians because he's “legally obligated” but doing the third installment without James Gunn wasn't what he signed up for.

“I was an f-up” Tim Allen opens up on decades old drug arrest
Teachers, child care staff nationwide can now sign up for vaccine shots under Biden’s order
‘Degrassi: The Next Generation’ star Jahmil French dead at 29
‘iCarly’ star Jennette McCurdy quits acting: “I resent my career in a lot of ways”
Capitol Police beef up security for March 4 amid concerns over QAnon theory
‘Raya and the Last Dragon’ star Kelly Marie Tran muses on scoring the Disney pop-culture Triple Crown