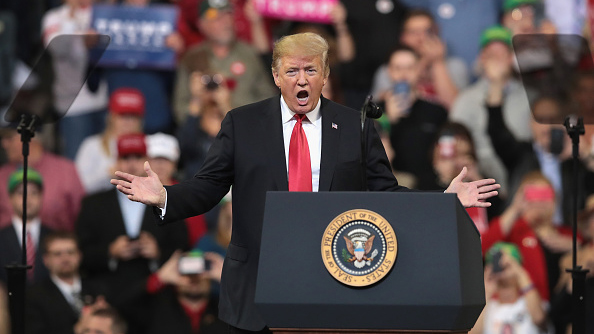 Scott Olson/Getty Images(COUNCIL BLUFFS, Iowa) — Still riding high from the confirmation of Brett Kavanaugh to the Supreme Court, President Trump reveled in the victory at a rally Tuesday night and continued to slam the Democrats – and warned that the opposing party is already working to undermine the new justice.
"Last week they were saying impeach, for what? For what?" Trump said.
"And besides I have to go first right?" half-joking at his own expense. "Even though we’ve done nothing wrong except create one of the greatest economies in the history of our country."
The president again accused Democrats of seeking to destroy Kavanaugh since the moment he was announced.
"What the Dems did to Brett and his family is a national disgrace," Trump said, "including the phony protesters that got paid and now they want to protest because they didn’t get paid and so they want their money, see that’s a real protest."
When he railed against Dianne Feinstein, mocking her denial of leaking Christine Blasey Ford’s letter, the crowd broke into "lock her up chants."
But, this time, the chants seemed to be directly targeted at Feinstein (not Clinton), something the president also observed: "I think they’re talking about Feinstein."
"Did she leak it? 100 percent," Trump said and then quickly qualified: "I don’t want to get sued. 99 percent. Now I can’t get sued."
He offered a special shout-out to Iowa’s Chuck Grassley, who he called "an Iowa legend," a "tough cookie" and a "great person."
In Iowa, corn is king
As he was expected to do, President Trump announced that the EPA will be easing regulations to allow for the year-round sale of ethanol.
"We’re going with E15 year round, okay, I made the promise to you during the campaign, promises made promises kept," Trump said to wild cheers from the crowd.
The timing of move, just a month ahead of the midterms, would appear to be an effort by the president to show farmers in America’s heartland that he’s still got their back.
The largest cheer of the night came when the president mentioned Nebraska, which prompted the Nebraskans in the crowd to loudly cheer in reply.
The president noticed the loud cheering and did a call-and-response with the crowd to see who was from Iowa and who was from Nebraska. And the Nebraska cheers were much louder. The president then concluded that he didn’t care.
"All I know is we have a lot of farmers in both and our administration is protecting ethanol, today we are unleashing the power of E15 to fuel our country all year long," Trump said.