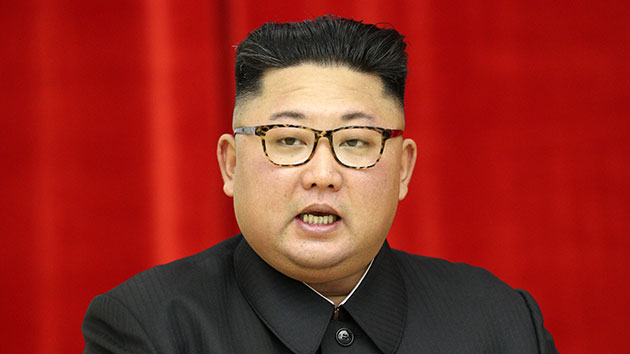 Pyeongyang Press Corps/Pool/Getty Images(PYONGYANG, N.K.) — Kim Jong Un, the once-reclusive leader of one of the world's most closed nations, appears to be continuing his recent international outreach by relaying an invitation for Pope Francis to visit North Korea.
The invitation follows a series of meetings between Kim and American officials, including a summit with President Donald Trump, and with South Korea's head of state.
Kim told South Korean President Moon Jae-in at a summit last month that he would "ardently welcome the pope if he visits Pyongyang," according to South Korean officials who were quoted widely in media Tuesday.
The news of Moon's interest in a visit from the pope comes as Moon is about to begin a European trip that will include a private conference with Pope Francis at the Vatican where the South Korean president is expected to pass on Kim's invitation in person.
Moon, a practicing Catholic, will meet with the pope on Oct. 18, Vatican spokesperson Greg Burke said.
Prior to the meeting, Cardinal Pietro Parolin, the Vatican’s secretary of state, will preside over a mass dedicated to peace in the Korean peninsula in St. Peter’s Basilica, which President Moon will attend, Burke said.
Prior to North Korea's founding during the Korean War in the late 1940s in the aftermath of World War II, Pyongyang was known as the "Jerusalem of the East."
But any form of worship is tightly controlled in North Korea, and some churchgoers are persecuted. The Holy See and Kim's government have no diplomatic ties.
Nevertheless, the Catholic Church in Seoul has worked at keeping communication channels open with its neighbor to the north.
The president of the Korean Bishops conference, Archbishop Hyginus Kim Hee-Joong, was present at a dinner for the South Korean delegation in Pyongyang last month, during the third summit between Korean leaders.
Moon introduced the archbishop to Kim at the dinner, and the archbishop relayed a message from the pope of peace and prosperity for the Korean people, the Italian news agency Ansa reported. The South Korean Catholic leader and Kim had another occasion to speak on the last day of Moon’s visit to the North.
The archbishop recounted on his return home that when he had told Kim he would tell the Vatican that the two Koreas were moving toward reconciliation and peace, Kim replied with a bow, saying, "Yes, please," Ansa reported.
Pope Francis has made repeated public appeals for peace on the Korean peninsula, and led the faithful gathered in St. Peter's Square in prayers for the U.S.-North Korean summit on June 10 this year.
The pontiff made a five-day trip to South Korea in Aug. 2014, his first visit to Asia as pope, during which he called for peace and reconciliation on the Korean peninsula.
"Korea’s quest for peace is a cause close to our hearts, for it affects the stability of the entire area and indeed of our whole war-weary world," Pope Francis said.
Copyright © 2018, ABC Radio. All rights reserved.

Trump’s leadership is ‘opposite of racism’: Kim Klacik on ‘The View’
Kim Kardashian West to ‘freeze’ Instagram posting for one day to protest hate speech, disinformation
Kim Kardashian responds to backlash over new Skims maternity collection
Trump to rally in Michigan on heels of Biden visit
North Carolina officials reject Trump’s call for supporters to vote by mail and in person
WH adds confusion to questions raised in new book about Trump’s hospital visit