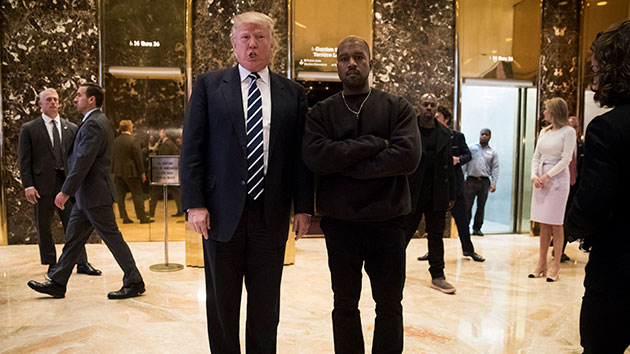 Drew Angerer/Getty Images(WASHINGTON) — Rap star Kanye West is to visit the White House on Thursday where he will meet with President Donald Trump and Jared Kushner, press secretary Sarah Sanders said.
“Kanye West is coming to the White House to have lunch with President Trump and he will also meet with Jared Kushner," Sanders said in a statement Tuesday morning. "Topics of discussions will include manufacturing resurgence in America, prison reform, how to prevent gang violence, and what can be done to reduce violence in Chicago.”
It’s unclear whether the White House will open West’s visit to the press. During the presidential transition, Trump memorably brought West in front of cameras in the Trump Tower lobby for an impromptu gaggle with reporters.
West has faced backlash in recent months after announcing his full-throated support of the president, including in a recent "Saturday Night Live" appearance in which he cast members "bullied" him.
"They bullied me backstage. They said, ‘Don’t go out there with that hat on,’" West said of his red 'Make America Great Again' cap. "They bullied me backstage. They bullied me. And then they say I’m in a sunken place."
The president soon after tweeted his support of West.
The timing of the visit is notable, coming just days after pop singer Taylor Swift broke her long silence on politics and announced her support of Democratic candidates in Tennessee’s senate and congressional races.
West’s wife, Kim Kardashian West, has visited the Trump White House twice since her husband announced his political backing of the president. She went for meetings related to securing clemency for individuals facing life sentences from nonviolent drug crimes.
Copyright © 2018, ABC Radio. All rights reserved.