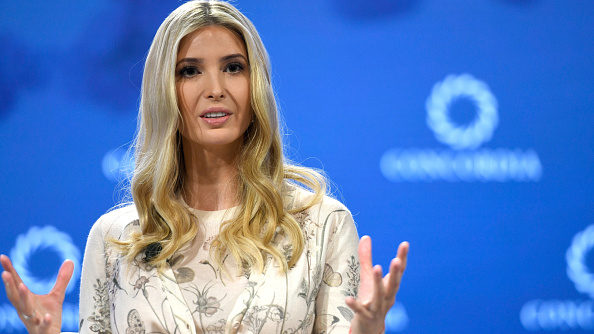 Riccardo Savi/Getty Images for Concordia Summit via Getty Images(WASHINGTON) — President Donald Trump said his own daughter and current White House adviser Ivanka Trump would be "dynamite" as a potential replacement for United Nations Ambassador Nikki Haley.
Trump said there is no one more competent for the job.
"The people that know, it's nothing to do with nepotism," Trump said on the South Lawn before leaving for Iowa. "Ivanka would be dynamite, but, you know, I would then be accused of nepotism, if you can believe it, right?"
"I think Ivanka would be incredible," Trump repeated. "It doesn't mean I would pick her. Because you would be accused of nepotism. Even though I'm not sure there is anybody more competent in the world. But that's OK. But we are looking at numerous people."
Haley unexpectedly announced her resignation from the Oval Office on Tuesday morning. The names of possible replacements — including the president's eldest daughter — were quickly floated in the press.
Haley thanked Ivanka and her husband, Jared Kushner, who were in the Oval Office during the announcement, for their work and friendship.
"I can't say enough good things about Jared and Ivanka," Haley said. "Jared is such a hidden genius that no one understands. Ivanka has been just a great friend. And they do a lot of things behind the scenes that I wish more people knew about."
Not long after Trump said that his daughter would make a great replacement, she stepped in to set the record straight, tweeting that Haley's replacement "will not be me."
Another woman, however, is on the short list for possible replacements — Dina Powell, the former deputy national security adviser.
"Dina," Trump told reporters aboard Air Force One, "would love it."