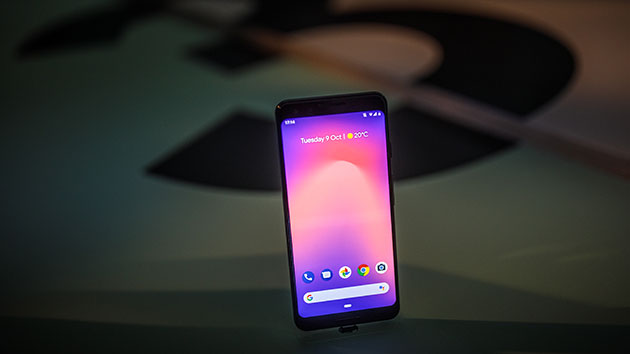 Jack Taylor/Getty Images(NEW YORK) — Google debuted its upgraded smart phone, the Pixel 3, the new Pixelbook tablet and an even smarter Home Hub at its annual "Made by Google" event in New York on Tuesday.
The event echoed Apple events with a clean, white aesthetic and touted celebrity collaborations, along with an emphasis on its smartphone cameras. Several Google execs referenced competitor products, sometimes obviously, sometimes obliquely.
The Pixel 3 features a new Group Selfie Cam, which the company said captures "184 percent more of the scene than iPhone XS" and a portrait mode.
Google also announced a partnership with publisher Condé Nast to photograph seven magazine covers with the Pixel 3. It also announced a collaboration with Donald Glover, aka rapper Childish Gambino. The event ended with a short film by director Terrence Malick, which was shot on the new Pixel 3.
The new Google Home Hub uses the company's artificial intelligence-powered Google Assistant, built into a desk- or countertop display with a control panel.
We "did not put a camera so it’s comfortable to use in private spaces of your home like the bedroom,” Google’s Diya Jolly said.
The device features Home View, a dashboard for the spectrum of home devices, including appliances, DVRs, lights and thermostats. The device pairs with more than 200 million devices and more than 1,000 brands, Jolly said. Through the home app, or remote control, he said, "It can turn down the temperature in the bedroom and up in the living room."
Paired with Google’s Nest, the device provides a remote way to see someone ringing a doorbell.
When not in use, Google Home Hub acts as a digital photo frame that can automatically download photos and use machine learning to edit out blurry and random shots using Google Photos, Jolly said.
The Home Hub is priced at $149 and pre-orders start Tuesday at the Google store today.
In the arms race to capture the smart home market, the new Home Hub is of particular interest. The Home Hub comes shortly after the second generation Amazon Echo and the Facebook Portal, revealed one day earlier, is built to house an Amazon Alexa.