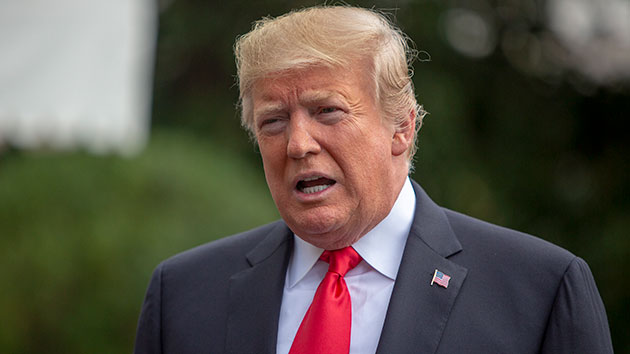 Tasos Katopodis/Getty Images(WASHINGTON) — Ahead of their departure together to the International Association of Chiefs of Police Convention in Orlando, Fla., President Donald Trump said he and Deputy Attorney General Rod Rosenstein have a “good relationship."
Rosenstein's future has been the subject of speculation in Washington circles in the wake of reporting that at a May 2017 meeting between Rosenstein and then-acting FBI Director Andrew McCabe, Rosenstein suggested that McCabe or others wear a wire when speaking with the president, according to memos McCabe made of the conversation, sources familiar with them told ABC News. The alleged meeting took place a week after President Donald Trump had fired James Comey as director, the sources said.
Rosenstein has denied the reports saying in a statement that he "never pursued or authorized recording the President and any suggestion that I have ever advocated for the removal of the President is absolutely false."
On Monday, Trump told reporters on the White House South Lawn he looked forward to chatting with Rosenstein aboard Air Force One, saying "no I don't" when asked if he had plans to fire him.
"I look forward to being with him. That will be very nice. We're going to be talking. We'll be talking on the plane," Trump said. I actually have a good relationship other than there's been no collusion, folks, no collusion. But I have a very good relationship."
Rod Rosenstein, Trump's embattled deputy attorney general, to meet with president on Thursday
When asked by ABC News if he is concerned about Rosenstein's loyalty, the president on Monday didn't directly answer but said he's gotten to know him and gets along very well with him.
"Look, I'm traveling with Rod I didn't know Rod before. I've gotten to know him and I get along very well with him," the president said.
President Trump also implied he had no plan of firing Rosenstein during his press conference a couple weeks ago in New York following the United Nations General Assembly. Trump similarly said he'd prefer to leave him on the job.
Copyright © 2018, ABC Radio. All rights reserved.